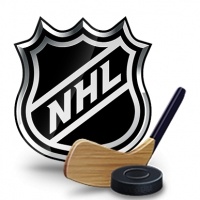 The flashing steel of their blades as they dart around the ice surface at a breakneck pace. The speed of the puck as they pass it so accurately from tape to tape across vast areas of the rink. The punishing hits. Masked men, robbing people blind. There's so much that is spectacular about the game of hockey. It is the ultimate team sport. A basketball team can win a title getting contributions from as few as seven players. Football teams rarely utilize their second stringers and there's always a few guys on every baseball team who only get free from the dugout or bullpen when the game is completely out of hand.

In hockey, every player matters. The best teams roll four lines and three sets of defensemen. The highly-skilled work the power play and the defensively responsible kill penalties. There's a role for everyone on the team to fill - scorer, checker, playmaker, grinder, puckstopper, shutdown defender. It takes 18 skaters and two goaltenders to win the Stanley Cup and at some point during the season, every one of them will have to step up and carry the day.

It's what makes hockey the ultimate team sport and why hockey should be the sport for you.

Why bet on hockey? Only because it's the most honest game on the planet. As much as it's about talent and high-end skill, the team that outworks the other will win most every night. There's an old saying in hockey - a team that works hard will always beat a team with talent if that talented team isn't willing to put in the work. Work ethic is the pride of a hockey team and players respect the game. You won't see any showboating on the ice after someone makes a big play. Players don't show each other up and on the rare occasion that someone crosses this line, they can expect to be punched in the face.

There is no greater camaraderie that exists than that of the bond formed inside a hockey dressing room. When a team comes together and endures through the emotions and adversity of the hills and valleys they will traverse en route to winning a Stanley Cup, this shared experience unites that group forever.

Who wouldn't want to be part of something so wonderful, and have a vested interest in the outcome of such a fanastic journey?

Where Can I Bet On Hockey Online

Have a look below and find the sportsbooks that satisfies all of your betting desires. Trustworthy, secure and offering great deals, you won't go wrong picking any of the sportsbooks our table.

Since 2005, when the NHL introduced a salary cap, the league has found a level of parity never before seen in the history of a loop that originally formed in 1917.

The difference between the Stanley Cup champions and the teams that ultimately end up as entry draft lottery contenders is razor thin and while this makes for tense nights on the ice for the teams, it's wonderful in terms of wagering opportunities on NHL games.

With just 16 playoff spots available to the 30 teams, every night the action is intense and upsets are frequent.