Bring yourself back to 1965 with this American classic featuring Eric “The Kid” Stoner played by film legend Steve McQueen. Imagine everything that comes with it – the gambling, the money, the women, the fame and the reputation.

This poker drama was written by Terry Southern and Ring Lardner Jr., in his first major work since being blacklisted as a member of The Hollywood Ten.

The script was adapted from Richard Jessup’s novel, which was inspired by The Hustler, got it? And though it received mixed reviews, Edward G. Robinson and Joan Blondell both earned critical acclaim and award nominations for their supporting roles.

When Eric Stoner, an up-and-comer in the poker scene, learns that Lancey “The Man” Howard is nearby, he decides to challenge him to a game. Though his friend Shooter (Karl Malden) warns him about a potentially negative outcome, Stoner goes through with it. After galavanting with women and some other preparations, The Kid and The Man are involved in a huge game with six players including Shooter.

As the game goes on and the bluffing continues, Howard begins to lose confidence, along with some big pots. As some well-timed seduction is going on by female characters intended to sway the outcome, the suspense in the poker playing continues to increase until the final, mind-blowing hand. The end result is one that would cripple the career of professional poker for life if he were to suffer the same bad beat.

Straight flush for Steve McQueen and Edward G. Robinson at the Box Office?

A massive hit indeed. Think The Hustler with a different spin on things, but realistic just the same. Mix a stellar cast together, masterfully playing out a well-written script, and the result is a winning hand here. Card players go nuts for this film and non-gamblers alike find it enjoyable. Even if you’re typically a sports bettor and don’t necessarily watch or even understand poker, you’ll be right at the edge of your seat nonetheless. McQueen kills it with his typical smooth style and great acting. Director Norman Jewison does a great job in his first collaboration with McQueen. All around it is simply a great movie that could be watched over and over again. 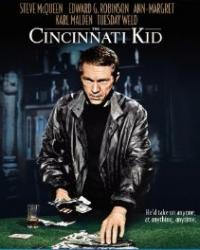