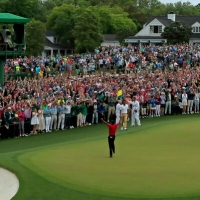 Each April, sports bettors flock to their online or local sportsbook to place a bet on the US Masters. Betting on golf is fairly straightforward, which allows beginner and novice bettors to quickly and easily get in on the action without a lot of betting experience.

We are still keeping an eye on the betting angles and strategies because with a new date, comes different weather and elements that will surely change things for the Masters' tournament.

The 2021 US Masters is back on, with the event now due to take place between April 5-11. The event will take place at the Winged Foot Golf Club, New York, in the United States. The odds were last updated on December 11, 2020:

How to Bet on the US Masters?

Established by amateur champion Bobby Jones, the US Masters golf tournament is one of the four major golf championships known as ‘The Majors’. In 1930, after Bobby Jones earned his grand slam, he purchased a plant nursery, and with the help of an architect, built Augusta National, the one and only home of the US Masters.

The first US Masters was played in 1934, and quickly became one of the biggest events in sports and sports betting, and to this day attracts tens of millions of viewers each year. The Masters tournament has a rich history with plenty of iconic golf moments and unique traditions like the coveted green jackets.

While the Masters has hosted many legendary golf champions, only a few have won more than three titles. Jack Nicklaus holds the record with six Masters titles between 1963 and 1986, Tiger Woods just earned his fifth title this past year, and Arnold Palmer holds five Masters titles.

Augusta National is widely considered to be the most beautiful golf course in the world, not to mention - the most exclusive. Membership at Augusta is strictly invitational - it doesn’t matter how much money you make, you can’t buy your way in. Knowing the golf course as a sports bettor will help you with your Masters betting - and we will show you why!

While it may seem trivial for some sports bettors, getting to know the course is one of the most important strategies when it comes to betting on the Masters. The Masters is the only Major that is held at the same course every year, so it’s a bit more simple than learning new courses - but, there are definitely some challenging holes that could affect the outcome.

How a player performs at Augusta usually is a pivotal point in their career. Rising stars making their Masters debut against some of the biggest names in golf, with some hefty odds against them. Few sports bettors and fans expect a rookie to come out and win the Masters tournament, and the odds reflect that.

Our first Masters betting tip for you is to look at past performances at Augusta. If a player has performed well at Augusta in the past, they likely will again. If they’ve attempted the course 10 times and not breached the top 20, they might not ever get a green jacket.

If it’s their first time, be a little wary, but if you know the golfer’s style, and think they could perform well, go for an Each-way bet to minimize losses if he doesn’t live up to your expectations.

Another interesting US Masters betting tip we’ve noticed is that right-handed golfers who draw from right to left tend to fare better than left-handed golfers who fade the ball. There have been lefties who navigate Augusta just fine, but this is just an observation based on how the courses are laid out.

Notable holes to watch out for at Augusta include:

Tea Olive: Hole #1 The opening tee at The Masters easily sets the pace for the tournament. The 445 yard Par 4 hole has plenty of room for spectators along the sides of the tee box, and a bunker about 300 yards down the fairway. How a golfer handles this hole should give you a good idea of how they will handle themselves for the duration of the tournament.

The 11th hole, named White Dogwood, is a 505 yard Par 4, with more length added in recent years, bringing plenty of hazards into play. Golfers who fare well on this shot tend to draw the ball, but a fade is also necessary to set up the second shot - where a greenside pond taunts players.

The 12th hole, Golden Bell, is by far the shortest hole on the course - a 155 yard par 3, but is easily one of the most challenging shots. There is water in front of a very narrow green, and many golfers struggle to keep the ball from rolling off the slick greens.

The first two shots of the 13th hole, Azalea, rounds out Amen Corner, with a 510 yard Par 5. Many golfers can make this shot in two, but they have to navigate a dogleg (Rae’s Creek and undulating green). This hole boasts the famous white bunkers that taunt the players each year.

Redbud: Hole #16 The final Par 3 comes alive on the Sunday of the Masters tournament, with the pin always hugging left next to a massive slope. Golfers have to get creative with this one!

Holly: Hole #18 This narrow, uphill fairway is a 465 yard Par 4, and can be a challenging shot with the elevated green and left side bunkers. The tee shot is absolutely critical for success at this hole, and many choose to hug the left side of the green.

Past US Masters Winners

Former winners (and their Masters betting odds) of the coveted US Masters green jacket include:

While there are so many sportsbooks in play, you might struggle to know which ones are legitimate, or safe. Luckily, we have some great recommendations of sportsbooks we use ourselves - we would never recommend a sportsbook that isn’t safe and secure.

Finding a sportsbook that meets your Masters betting needs, including the odds and props you’re looking for, deposit options, bonuses and even mobile compatibility. There’s no point in signing up for a sportsbook if you can’t bet on the futures or props you want to place a wager on.