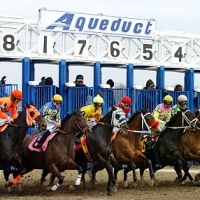 Aqueduct Racetrack has been a fixture of the New York Thoroughbred racing scene since the track opened in 1894. Located in Ozone Park in Queens, New York, the track has continued to develop and grow over the years. The most recent major upgrade came in 2011 when Resorts World New York City became the first legal casino in New York City and opened at the racetrack featuring slot machines and automated table games.

Aqueduct has a 1 1/8 mile main track and also has a one-mile Inner Dirt track that is used during winter racing. The turf course is seven-furlongs.

Live Thoroughbred racing is held at Aqueduct Racetrack beginning in late October every year through April. During the winter, racing is held exclusively on their Inner Dirt track.

Aqueduct Racetrack is the host of numerous graded stakes races throughout the year including races that serve as major preps for both the Breeders’ Cup and Kentucky Derby. These races can have major implications on the year-end awards, the Eclipse Awards.

The entries routinely feature some of the biggest and most recognizable names in the country from both trainers and jockeys. The jockey colony at Aqueduct is regarded as being one of the most competitive in the country.

The Wood Memorial Stakes is a key prep race on the road to the Kentucky Derby and, with the current point system, all but guarantees the winner a spot in the starting gate in the Run for the Roses. The $1 million race is a Grade 1 contest and is run at a mile and an eighth on the main track every April. The race was began in 1925. Eleven horses have parlayed a victory in the Wood Memorial into a win in the Kentucky Derby.

Eddie Arcaro has a record nine wins in the race as a jockey while trainer Sunny Fitzsimmons has seven winners as a trainer.

The Wood Memorial also has a distinction as being an important race for potential stallions to win and has produced, in contemporary years, some of the most prolific modern day studs including Unbridled’s Song, Empire Maker and Tapit. 2012 winner, Gemologist, is also off to a promising start as a young stallion.

The Cigar Mile Handicap was originally known as the NYRA Mile but was renamed in 1997 after Cigar, the winner of the race in 1994, was retired following a remarkable career. The one-mile contest is traditionally held on the day after Thanksgiving every year and is a major Grade 1 event for older horses. The purse is currently $500,000.

The Carter Handicap has one of the longest and richest histories of races at Aqueduct and was run for the first time in 1895. The particulars of the race, including the distance, changed in the early years but it has been run at seven furlongs since 1903. The Grade 1 event for older horses currently holds a purse of $400,000.

The Carter Handicap has been the showcase for some of the all-time greats in Thoroughbred racing and was won twice, in 1974 and 1975, by Forego. The track and stakes record was set in 1999 by champion sprinter Artax who completed the seven furlongs in 1:20.04 and that record still stands.

Originally known as the Maskette Stakes, the race was renamed in 1992 to honor the champion filly Go For Wand who suffered a catastrophic breakdown in the Breeders’ Cup Distaff and won this race in 1990. It was originally held at Aqueduct and then shifted to Saratoga Racecourse from 1994-2009. There was no running in 2010 but the race returned home to Aqueduct in 2011 and has been held there since. There is currently a purse of $300,000 and the race holds Grade 2 status for fillies and mares. It is contested at one mile.