The road to the 2017 Kentucky Derby begins on Monday, January 2nd in the Jerome Stakes at Aqueduct. The Grade 3 event offers a purse of $150,000 and points towards a spot in the starting gate on the first Saturday in May. All Thoroughbreds officially turn a year older on January 1 and a field of seven newly minted sophomores is scheduled to line up in the mile and seventy yard race. The last horse to win both the Jerome Stakes and the Kentucky Derby was Fusaichi Pegasus in 2000. 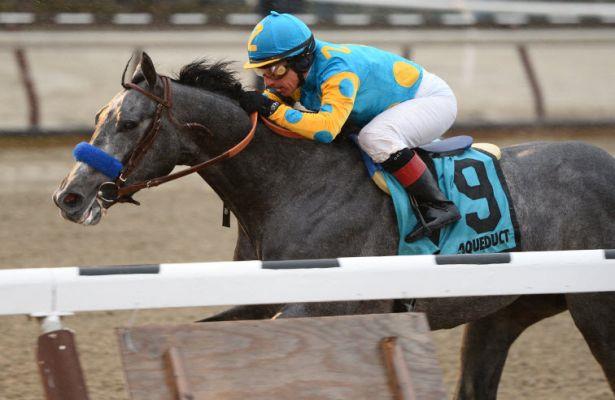 Kieran McLaughlin will saddle two contenders including the even-money favorite Takaful. A Shadwell Stable homebred, the dark bay son of Bernardini is the first foal from an unraced daughter of Distorted Humor. From two starts, Takaful has one win and a third-place finish.

After breaking his maiden impressively in his debut at Belmont Park by eight-lengths, he had to settle for third in the Remsen Stakes (G2) after setting the pace as the heavy favorite. Since that race, he has recorded two consecutive bullet workouts and will have regular rider Jose Ortiz in the irons. Also representing the McLaughlin barn is True Timber, a longshot at odds of 12-1 for Calumet Farm. Purchased for $170,000, he finished fifth in his debut and came back to break his maiden as the favorite over seven rivals.

Trainer Todd Pletcher also has two horses in the race, Bonus Points at odds of 15-1 and Win With Pride at 6-1 odds. Bonus Points, a bay son of Majestic Warrior, is one of the more experienced runners in the field with five lifetime starts. He has been on the board in four of those races and will be trying to earn his second career victory. The versatile colt has been competitive on both turf and dirt and has run well on both a fast and a muddy main track. He will have Manuel Franco in the irons and they will break from the rail.

Pletcher’s other starter, Win With Pride, will break from the outside post under jockey Irad Ortiz, Jr. The dark bay son of Distorted Humor was purchased for $450,000 as a yearling and boasts an impressive female family. His dam, Love and Pride, earned just shy of $1 million on the track and is a half-sister to champion and top sire Bernardini. Win With Pride broke his maiden in his second career outing at Parx and was last seen finishing fourth in the Remsen Stakes (G2).

The second choice at odds of 3-1 on the morning line is El Areeb for trainer Cathal Lynch. Purchased for $340,000 as a juvenile, the gray son of Exchange Rate has won two of his four starts and is the only horse in the field with a stakes win on his resume. He won a minor stakes race at Laurel Park last time out by 5 ¼ lengths after setting the pace. All four of his starts to date have come sprinting and he will be stretching out to two turns for the first time. Trevor McCarthy will remain aboard and they are scheduled to break from post position six as he tries to earn his third straight victory.

Here is the field for the Jerome Stakes along with morning line odds.

Did you enjoy this article? Share it!
Tweeter
Follow us!
More articles...
Sports Betting News - 06/07/20
UFC 251 Predictions for Usman vs. Burns

If you ever had any doubt that UFC would actually host a Fight Island, you won't anymore. It is happening. Like, actually happening. The Fight Island series begins on July 11, with the headlining bout between Kamaru Usman and Gilbert Burns and another two championship tilts. And if you're in the market to make some money off this huge event, […]