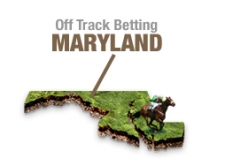 Maryland is a great horse racing state with a long history of epic events featuring many of the best thoroughbreds in the sport. In fact, the United States Congress shut down for a day on October 24th, 1877, to witness a three-way, 2 1/2 mile duel at Pimlico between Parole, Ten Broeck and Tom Ochiltree.

A variety of OTB racing sites give players a chance to wager on events they're unable to attend, including online racebooks that provide wagering services for all the biggest races. One advantage of online racebooks are their promotions, which offer boosts such as rebates and betting bonuses.

The premiere race course of Maryland state is Pimlico Race Course, which started to welcome thoroughbred racing fans in 1870. During that first year, Preakness won the inaugural Dinner Party Stakes. Three years later, the Preakness Stakes was named after the horse. The Preakness Stakes is the second jewel of horse racing’s Triple Crown and Preakness Day is the marquee event at Pimlico. Pimlico was also the site of the legendary battle between Seabiscuit and War Admiral during the 1938 Pimlico Special.

Opened on October 2nd, 1911, Laurel Park is one of the oldest facilities in North America. In recent years, the track has seen an upswing in both purses and the quality of competition. While the track does not have an event as prestigious as the Preakness Stakes, Laurel Park is one of the most competitive tracks in the Mid Atlantic. Many of the top horses of the 20th Century, including Secretariat, Affirmed, War Admiral and Seabiscuit, have competed at Laurel Park.

The Preakness Stakes is the second jewel of Thoroughbred racing’s most coveted prize – the Triple Crown. Held just two weeks after the Kentucky Derby at Pimlico, the race routinely draws the top three-year-olds in the country. Also held at Pimlico is the Black-Eyed Susan Stakes for three-year-old fillies. It was inaugurated in 1919 and has featured some of the best sophomore fillies in history over the years including Serena’s Song, Silverbulletday and Royal Delta. It currently holds Grade 2 status.

Laurel Park holds quite a few stakes races restricted to Maryland-bred horses in support of the state breeding program. In addition to those races, they also hold the Commonwealth Turf Cup and the Commonwealth Derby in the fall – both of these are Grade 2 races with purses of $200,000.

Off Track Betting in Maryland

OTB betting locations allow fans to wager on a wide variety of horse racing events from around the world. In Maryland, all horse racing and associated wagering is monitored by the Maryland Racing Commission, including OTB facilities in the counties of Charles, Frederick and Cecil.