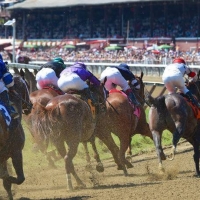 The Travers Stakes is a beloved contest for three-year-old Thoroughbreds held every August at Saratoga in New York. The race is nicknamed as the Midsummer Classic because it typically brings the winners of the Triple Crown races together to do battle over 1 1/4 miles for a purse of $1 million.

The 2020 Travers Stakes was won by Tiz the Law, who has enjoyed an excellent year at the races.

Congratulations to New York–bred Tiz the Law on today’s win at the Travers Stakes in Saratoga Springs.

He does New York proud and is #NewYorkTough https://t.co/zg7Bphsjk6

The odds to win The Travers Stakes are available. The odds are subject to change, as such we'll update this page to ensure our readers get the latest. The odds were last updated on September 3, 2020:

The 2020 Travers Stakes (G1) will be run August 8, earlier than normal due to the rescheduling of the Kentucky Derby to September 5. Belmont Stakes (G1) winner Tiz the Law is expected to head the field. Check your favorite bookmakers to find the best Travers Stakes betting odds.

The Travers Stakes entries and odds are officially drawn the Wednesday before the race, which in 2020 means Wednesday, August 5. The field is expected to include 2020 Belmont Stakes winner Tiz the Law, who is five for six lifetimes and also won the Florida Derby (G1). Barcaly Tagg trains the son of Constitution, who was a Grade 1 winner at two.

His top competition includes Max Player, Uncle Chuck, and Country Grammer. Max Player was third in the Belmont Stakes after winning the Withers Stakes (G3) for trainer Linda Rice. Uncle Chuck is unbeaten in two starts for trainer Bob Baffert including the Los Alamitos Derby (G3), which is a prep race for the 2020 Kentucky Derby. Country Grammer has a Grade 3 win over the Saratoga surface already.

Tiz the Law is a deserving favorite in the Travers Stakes and should win. However, Saratoga is known as the Graveyard of Champions. Horses that have gone down in defeat there include Man o'War, Secretariat, American Pharoah, and Rachel Alexandra. Only two favorites have won the Travers in the last 10 years, and one of those was a dead heat with a longshot. It is worth it to find a price play in a race that is typically won by a horse with mid or longer odds.

Max Player ran very well in the Belmont Stakes, and trainer Bob Baffert has won the Travers Stakes twice in the last few years with Arrogate and West Coast. If he sends the highly touted Uncle Chuck to the race, that could be the horse that upsets Tiz the Law. Country Grammer won the Peter Pan Stakes (G3) locally on opening weekend and could round out the superfecta.

The winner receives a blanket of red and white carnations, the Man o' War Cup trophy, and the winning silks are painted on a canoe in the Saratoga infield.

The very first Travers Stakes was won by Kentucky in 1864. Seven fillies have won the Travers, including Ruthless, with the most recent filly winner being Lady Rotha in 1915.

A horse named Hindoo won the race in 1881 as part of an 18 race win streak. The mighty Man o' War won the Travers in 1920 over Upset, the horse who handed him the only loss of his career, in record time.

Whirlaway became the first and only Triple Crown winner to win the Travers in 1941. American Pharoah tried to match that feat in 2015 but finished behind Keen Ice in an upset.

The most talked-about edition of the Travers was in 1962 when top three-year-olds Ridan and Jaipur broke together and battled for the entire 1 1/14 miles. Jaipur ultimately won by a nose in track record time.

Damascus has the margin record for the Travers at 22 lengths. That happened in 1967.

In 1978, arch-rivals Affirmed and Alydar met for the final time in their 10-race rivalry. Affirmed had defeated Alydar in all three Triple Crown races, and crossed the finish line first in the Travers, but was disqualified for interference.

In 2001, Point Given became the first horse to ever win four consecutive $1 million races when he won the Travers after already winning the Preakness, Belmont, and Haskell. He went on to be named Horse of the Year.

The first dead heat for the win in Travers history came in 2012, with favored Alpha and longshot Golden Ticket being inseparable at the wire. Saratoga had to add a second canoe in the infield pond and a second winning jockey's statue in the paddock.

The most wins by a trainer is five for Bert Mulholland, with his most recent win coming in 1963. Trainer Shug McGaughey is closest to breaking that record with four wins.

Arrogate was a surprising 11-1 when he scored in 2016 in record time. He went on to win the Breeders' Cup Classic, Pegasus World Cup, and Dubai World Cup in one of the most historic runs in racing lore.

Some recent Travers Stakes payouts include:

Only two favorites have won the Travers Stakes in the last 10 years.

Watch for jockey Javier Castellano, who has already won the race six times (Keen Ice, V.E. Day, Afleet Express, Catholic Boy, Bernardini, Stay Thirsty) and is in the prime of his riding career. John Velazquez (Flower Alley, Code of Honor) has won it twice in the last 15 years, as has Mike Smith, who has won it four times overall (Arrogate, West Coast, Coronado's Quest, Holy Bull).