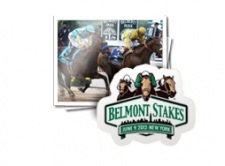 Belmont Park is referred to as “The Championship Track” due to the fact that nearly all of the best thoroughbreds in the modern history of the sport have competed at this facility. This legendary track is located in Elmont, which is just outside of the border of New York City. Of the three tracks that hold Triple Crown competitions, Belmont Park was the last to be constructed, opening to the public on May 4, 1905.

If you can't make it to Belmont Park to take in the competition for yourself, the next best bet is to join up with a racebook that gives you the ability to place wagers on all of your favorite horses and races. Compare the different bonuses, rebates and other promotions to make sure that you're getting the best deal possible.

Construction of this facility was initiated by August Belmont II and William C. Whitney, who were impressed with the size and scope of European racetracks and wished to replicate the grandeur on American soil. After a search for the appropriate land upon which to build, they settled on a 650 acre plot that included a Gothic and Tudor-style mansion previously occupied by William de Forest Manice.

The first race had a post time of 3pm, which resulted in traffic jams as residents of New York attempted to make it to Belmont Park in time to catch the first race, which was won by Blandy, a horse owned by August Belmont II. The Belmont Stakes switched from Morris Park Racecourse to Belmont Park the year the latter opened.

The impressive space of Belmont Park has allowed the facility to host some of the first big aviation events in the United States. The Wright brothers even held an international aviation event in 1910 that attracted 100,000 spectators, including competitors from around the world. Belmont Park was also the first site of airmail service between Washington and New York City.

When Smarty Jones attempted to finish his Triple Crown run in 2004, the park saw a record attendance of 120,139. In 2015, attendance was capped at 90,000 for American Pharoah's sweep of the Triple Crown, despite the fact that the 2015 Kentucky Derby set an attendance record of 170,000, followed by the Preakness setting its own record with 130,000 showing up to watch American Pharoah dominate the competition.

Other big name races hosted by Belmont Park include the Metropolitan Handicap, the Jockey Club Gold Cup and the Manhattan Handicap, all of which are Grade One races with purses of at least $1,000,000.