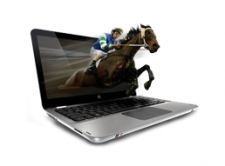 Horse racing is one of the oldest competitive sports in history and has roots tracing back to the very beginning of civilization. Since those days, the sport has evolved into one of the richest in the world.

While Thoroughbred racing is the most well known, there are several other breeds that are prominently raced and have prestigious, big-money events including Standardbreds, Quarter Horses and Arabians. These equine athletes make up an industry that is valued in the tens of billions of dollars.

In the beginning, American Thoroughbred racing was known as the “Sport of Kings” and was reserved for the most wealthy. These days, the sport attracts a much wider demographic of participants including some prominent sports figures and celebrities like Jim Rome, Wes Welker and Bobby Flay. Major venues like Churchill Downs and Saratoga routinely welcome tens of thousands of fans on a regular basis.

Online racebooks make it easy to enjoy betting on horse races from across the country all from the comforts of home through a computer or mobile device. In addition to the convenience and security, online racebooks typically offer more bang for your buck with better odds, rebates, bonuses and other promotions.

The Most Popular Horse Races Online

The most coveted achievement in all of Thoroughbred horse racing is the Triple Crown which consists of the Kentucky Derby, the Preakness Stakes and the Belmont Stakes. In 2015, American Pharoah ended a 37-year drought and became the first horse to sweep all three races since Affirmed in 1978. In between those two triumphs, many horses had tried and failed.

While the Kentucky Derby may be the most well-known horse racing event, the Breeders’ Cup is the biggest two days of horse racing of the year. Held at a different location each year, the Breeders’ Cup features thirteen races over a span of two days. Each race is a Grade 1 with a purse of at least $1 million and there is a total of $26.5 million up for grabs. The races often are critical factors in deciding the year-end divisional championships as well as Horse of the Year.

The Dubai World Cup at Meydan Race Course has held the title as the richest race in the world with a purse of $10 million but for the first time will be upstaged in 2017 by the inaugural running of the $12 million Pegasus World Cup at Gulfstream Park.