The Super Bowl has always been more than just a game. For those who wager on the game - which based on the amount wagered is many of you - there are numerous Super Bowl prop bets to keep you in the action all day long.

On the surface, you might think that Super Bowl Sunday, where the New England Patriots opened as three-point picks over the Atlanta Falcons, is the weakest day of the season for betting on the NFL because there's only one game.

But if you are from that school of thought, you're either new to wagering on the Super Bowl, or you simply haven't been paying attention. Prop bets are as much a tradition at the Super Bowl as players announcing that they are going to Disneyland.

Which way with the coin flip go? Will the Star Spangled Banner be over or under? What color of Gatorade will they pour over the head of the winning coach?

These questions and others will be answered on Super Bowl Sunday. And if you wager correctly, you can still go home a winner, even if the team you back to take the big game doesn't achieve the victory.

Some of the best Super Bowl prop bets, courtesy of Bovada.lv:

It is literally a 50-50 proposition. Heads or tails, you make the call on the pre-game coin toss. Maybe it's the simplicity that makes this one of the more popular Super Bowl prop bets, with hundreds of thousands of dollars wagered annually on the coin toss.

Bovada.lv is offering -105 whichever way you opt to go. Historically, tails owns a 26-24 edge, although five of the last eight Super Bowl coin tosses have gone the way of heads. The NFC has won 17 of the last 19 coin tosses.

You can also wager on whether the team that wins the coin toss will also go on to win the game, and you will get -115 on whichever way you choose to go. The coin-toss winner owns a 4-3 edge in winning the game over the past seven Super Bowls. The coin toss loser is on a two-game winning streak, however.

You also get -115 odds either way on whether the team that calls the toss will be right or wrong.

The New York Giants began this tradition when they drenched coach Bill Parcells with a bucket of Gatorade as the clock wound down on their Super Bowl XXI win over the Denver Broncos. It's grown to symbolize the traditional victory cigar of a championship football game.

Since Gatorade added an array of colors to its sports energy drink, history tells us to go with orange or clear when wagering on the Gatorade shower. Each of those have been poured over a coach's head four times.

Country and western star Luke Bryan will handle the signing of the Star Spangled Banner before Super Bowl LI, the first male singer since Billy Joel prior to Super Bowl XLI.

The over/under isn't yet set on Bryan's performance but if you want to do a little advanced scouting, here he is performing the Star Spangled Banner prior to his opening-night concert U.S. Bank Stadium in Minneapolis last August:

The average length of the National Anthem over the past 11 Super Bowls was 1:58.

Will it be a touchdown? A field goal? Or, as it has surprisingly been in three of 50 previous Super Bowl games, a safety? And which team will get the first points of the game?

The Tom Brady-Bill Belichick Patriots are 4-2 in Super Bowl play but they have opened the scoring in just two of those six games, so that might explain why Bovada is offering -125 on New England getting the first score and -105 on it being the Falcons who find the first points of the game. 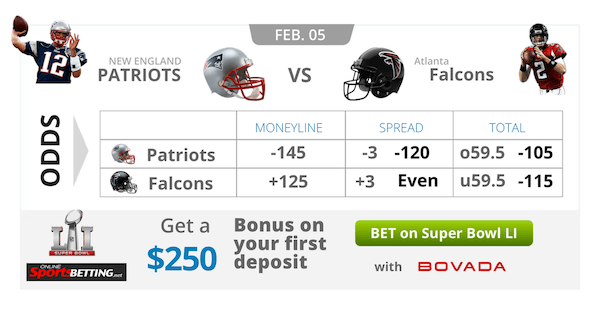