Nobel laureate Daniel Kahneman's Thinking, Fast and Slow secured the psychologist dazzling reviews, countless awards and a spot on several best-of lists. The research and views provided in this book have had an incredible impact on the interpretation of human behaviour.

Hailed as an instant classic, Daniel Kahneman's Thinking, Fast and Slow nabbed awards galore for its approach to human thought.

The Nobel Prize winning psychologist presented a look at the dynamics of the mind which splits thinking into a two-system proposition. System 1 operates quickly and is intuitive and emotional. System 2 moves at a slower pace and is rooted in the logical and the deliberate. Kahneman presents that we can properly harness these systems and learn how to not fall victim to the weaknesses attached to their attributes.

Thinking, Fast and Loud pulls for an enormous collection of research and analysis. It sounds daunting, but the information and evidence is punctuated with examples that allow the reader to absorb these concepts in a relatively accessible way. Kahneman effectively communicates humanity tendency to be influenced by bias and separate from rationality. It's a book rich with detail and packed with tangible concepts to connect with.

The praise lavished on Kahneman is well-earned. Thinking, Fast and Slow is an impressive marriage of the intellectual and the engaging. The truths unearthed have had a remarkable impact on the way human behaviour is interpreted and reshaped philosophies in the world of cognitive science. Utilizing the concepts presented in this book might even change the way you think. 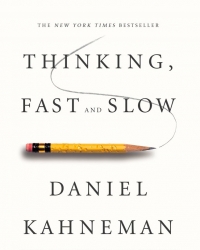