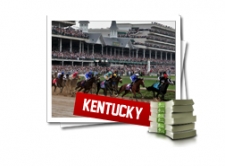 There are few sporting events as iconic as the Kentucky Derby. Heralded as the “fastest two minutes in sports”, the Run for the Roses is held annually on the first Saturday in May at Churchill Downs in Louisville, Kentucky. The race is the centerpiece of a two-week long festival that takes over the city of Louisville. The Kentucky Derby fills Churchill Downs to capacity each year and attracts one of the largest crowds of all of the major North American races. [+]

The race is contested at the classic distance of a mile and a quarter and holds Grade 1 status and a purse of $2 million. Since the inaugural running in 1875, the Kentucky Derby has been held every year. It is restricted to three-year-old Thoroughbreds but both colts and fillies are eligible to compete, though a filly has only won the race three times throughout history.

The Kentucky Derby is rich with tradition and pageantry. From the mint juleps to the stirring rendition of “My Old Kentucky Home” as the horses make their way on to the track, the Kentucky Derby is one of the oldest and most prestigious events in all of sports.

If you can't make it to Churchill Downs to watch the Kentucky Derby, heading to an online racebook is the next best way of boosting the excitement of one of the most prestigious races in the world. Always take the time to compare the different types of promotions that racebooks offer before signing up. Wagering services provide different types of betting boons, such as deposit bonuses and wagering rebates that help raise the odds of winning.

To compete in the Kentucky Derby, a horse must qualify for the race through a series of prep races called the Road to the Kentucky Derby. The series features a total of 34 races which begin for two-year-olds and extend through the sophomore season. The points are scaled depending on when the race is run and only the twenty horses with the most points earn a spot in the starting gate for the Run for the Roses.

In 2015, American Pharoah ended the Triple Crown drought and became the first horse since Affirmed in 1978 to sweep the Kentucky Derby, Preakness and Belmont Stakes. This was following a series of heart-breaking near misses, most recently by California Chrome in 2014 who won the Derby and Preakness but fell short in the Belmont Stakes. Nyquist, the champion two-year-old in 2015, kept his undefeated streak intact and won the Kentucky Derby in 2016 only to falter in the Preakness.

Only two horses have ever broken the two-minute mark at the Kentucky Derby. The legendary Secretariat still holds the record, completing 1 1/4 mile in 1:59:40 during the 1973 edition. In 2001, Monarchos came close to besting the record, becoming the second-fastest horse at the derby with a time of 1:59:97. The last filly to win this race was Winning Colors in 1988.

After a prep season that saw no colt emerge as a clear-cut favorite for the Derby, the lukewarm choice leading up to May 6 is the Mark Casse-trained Classic Empire, who will be trying to follow in the shoes of 2016 winner Nyquist and win the Derby after winning the Breeders' Cup Juvenile last fall. Despite some issues that caused him to miss a good portion of spring training, he returned to the track in time to capture the Arkansas Derby in solid fashion.

Another that answered some questions by winning his final prep is Irish War Cry. A New Jersey-bred colt, he was something of an unknown when he won the Holy Bull Stakes at Gulfstream in February, but faltered badly in his next start to finish seventh. He rebounded by winning the Wood Memorial at Aqueduct, stalking a fast pace early before taking over in the stretch and pulling away from the field, a running style that has been very successful in the Kentucky Derby in the past. Rounding out the big three is Always Dreaming, who won the Florida Derby in his first graded-stakes try, in the fastest 1 1/8 mile time of all the Derby contenders.

Among the longer shots leading up to the race, McCraken was a popular choice at the beginning of the year, but like Classic Empire, injuries set him back his training. He only managed an unspectacular third-place finish in his final prep in the Blue Grass Stakes, although he already had enough points to make the Derby field, and trainer Ian Wilkes may have simply been wanting his colt to get into a race prior to the Run for the Roses.

Girvin actually finished at the top of the points leaderboard with wins in two of the Louisiana prep races, but he has yet to face any of the top contenders. Hence is another virtual unknown who won the Sunland Derby in a time just a bit slower than Always Dreaming in Florida.

While Cloud Computing qualified for the Derby in 20th spot on the leaderboard, his connections have indicated he will likely not run, allowing the #21 horse, Untrapped, to draw into the field. It is also expected the #13 horse on the leaderboard, Malagacy, will also pass on the Derby, opening a spot for Lookin' At Lee.

Final entries and the post position draw will take place on Wednesday, May 3.