All In: Movie Review

Released in 2006, All In is an emotional story set in Las Vegas and surrounding the game of poker. All In was directed by Nick Vallelonga, a director, actor and producer. The movie is a cross between a comedy and drama, and features six medical students who come together to attempt to win the World Series of Poker.

The stars of All In are Dominique Swain, who plays Alicia “Ace” Anderson and her father in the movie, Seal, played by Michael Madsen. This movie is considered an independent film with a very low budget. Despite that, the soundtrack is phenomenal and fits the more emotional parts of the movie very well. Alicia is the daughter of a professional gambler, which is where she learned how to play poker so well. Throughout the movie, you see a lot of flashbacks of Seal trying to give his daughter a good life, even though he owed money just about everywhere and had issues with his wife, among other things.

All In film summary

The film starts with Alicia Anderson (Swain), nicknamed Ace, who is currently in medical school. From the very beginning, you see frequent flashbacks to her beloved father Seal, who taught her Texas Hold-em and the mathematical probabilities needed to win a hand of poker. When medical school becomes too stressful and the financial burden becomes too much, she decides to use the skills she learned from her late father and attempt to win the World Poker Championship. But she doesn’t go alone; Alicia brings along five other medical students, each of whom have their own unique talents. Although the movie makes it clear that her father dies in a car accident early on, Michael Madsen shines in many of his flashback scenes

This is what Seal (Madsen) taught his daughter Alicia (Swain) from an early age. When her and her friends from medical school enter the World Poker Championship, Alicia discovers why her father told her this so many times. All In has a number of plot twists, plenty of emotion, comedy and drama all in one film. Movie viewers who are interested in a good story that on the outside looks to be about poker, but on the inside is about the relationship of family and importance of taking risks, would enjoy All In. It even has a somewhat shocking plot twist at the end that leaves first time watchers with their jaws dropped. 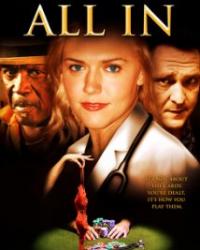