House of Games is a 1987 film, written and directed by David Mamet, along with co-writer, Jonathan Katz. The film focuses on world-renowned psychiatrist Margaret Ford, played by Lindsay Crouse and gambler in trouble, Billy. She soon meets conman Mike (Joe Mantegna), the man Billy owes money to. After trying to help Billy get out of his gambling debts, she gets caught up in a scam, and is soon entangled in the psychological drama.

Lindsay Crouse and Joe Mantegna deliver flawless lines and outstanding performances that leaves you guessing who the real con is until the very end. While watching it, if you think you have it figured out, you probably have it wrong. Trust, betrayal, politics and plenty of games all play a part in House of Games.

House of Games is a giant puzzle from the very beginning. It starts off with Margaret, who is a famous psychiatrist and recently published a book called Driven: Compulsion and Obsession in Everyday life. This causes Billy to come to her for help, claiming he owed $25,000 and if he doesn’t pay, he will be killed. She agrees to meet with the person he owes money to, by the name of Mike. Mike says he only owes him $800 and he is willing to let it go if Margaret agrees to a high-stakes poker game. The exhilaration from the poker game leads to a much larger scam, involving several people where every game leads to a much larger game in the entire House of Games puzzle.

House of Games takes you on a whirlwind of games, wondering who is the actual conman (or conwoman) every step of the way. By the end, you’re equally shocked and pleasantly surprised by the turn of events. While Billy is the very start of the movie, he ends up being a small supporting character, as Margaret and Mike take up much of the movie. Anyone looking for a drama with endless twists and turns, House of Games is it.

House of Games got mostly positive reviews from critics and outstanding reviews from movie watchers. Roger Ebert gave the film its highest rating, at four stars, and called it “diabolical and impeccable.” Critics praised the story line and plot twists, Mamet’s excellent script and direction, and the impressive acting by Lindsay Crouse and Joe Mantegna. If you are looking for a thrilling movie with plenty of twists turns, House of Games is absolutely the film for you. Do not hesitate to rent this movie the next time you want to watch an older film that has plenty of drama and action. 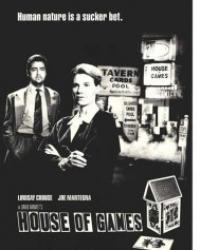