Lucky You (2007) is about a professional poker player who is attempting to win the World Series of Poker championship in Las Vegas. The main character, Huck Cheever (Eric Bana) is attempting to win a big poker game but is distracted by personal issues. Billie (Drew Barrymore) a Vegas singer gal makes an entrance to provide Huck a bit of comfort but this is temporary as he’s up against his estranged father in the tournament, L.C. (Robert Duvall).

Lucky You was written and directed by Curtis Hanson, along with Eric Roth. Eric Bana, Drew Barrymore and Phyllis Somerville are the primary cast of the movie, with other supporting characters, including Robert Duvall.

The dynamic proposed by the various long poker game scenes in this movie have caused it to be quite popular amongst poker fiends.

It is clear upfront that many of the issues Huck Cheever has, are his own doing. He is a brilliant poker player with the skills needed to win the poker tournament, but he tends to let his emotions and personal problems take hold of him. In the week leading up to the tournament, you see Huck go through a lot, including meeting Billie, winning some games, losing some and getting money wherever he can for the $10,000 entry fee. The plot is further challenged after the tournament starts and Huck finds out he has to play against L.C., his father who left them at a young age.

Lucky You was released in 2007, but set in 2003. By the end of the film, Huck decides to purposely give up the tournament, by folding prematurely and coming in 3rd place. L.C. is then up against Jason Keyes, played by Evan Jones, who ends up winning the tournament. It has a happy ending with a good resolution between Huck and L.C. as well as Huck and Billie.

Cameos by Poker Pros steal the Lucky You show

One of the most memorable things about Lucky You is how many poker pros make cameos in the movie. More than 20 poker pros are seen throughout the movie, including Chris Ferguson, Barry Greenstein, Ted Forrest, Karina Jett, Sam Farha, Erik Seidel and John Juanda. The World Series of Poker host Jack Binion and director Matt Savage are also in the film. With so many poker pros, it is no surprise that the game sections are long, but realistic. The next time you are planning to rent a movie at home, make sure you pick this one up, no matter how interested you are in poker. You will find yourself immersed in the dialogue, the action, and the storyline. 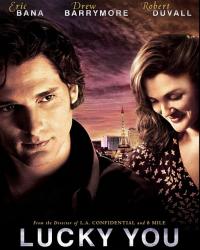