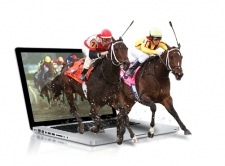 Horse racing around Indianapolis, Indiana has contributed to the sport on a national level, especially during the early 20th century, with the birth of Dan Patch in Oxford, Indiana. He was the first superstar of the 20th century, drawing fans from all around the United States, introducing millions to the excitement of the horse racing.

Residents of Indianapolis get to enjoy top notch racing close to home, but for large thoroughbred events that take place elsewhere, online racebooks allow fans to wager on the best races from the comfort of their smartphone. Many racebooks offer great bonuses that help make the most out of your betting dollar.

Hoosier Park, located at 4500 Dan Patch Circle in Anderson, finished construction in 1994 and has quickly become a major influence when it comes to horse racing around the Indianapolis area. Due to the quality of the facilities, a 2009 survey of 65 thoroughbred race tracks conducted by the Horseplayers Association of North America ranked Hoosier Park number four in the United States and Canada.

The other big race track close to Indianapolis is the Indiana Grand Race Course, formerly known as Indiana Downs. These facilities host the biggest thoroughbred races in the state, including the Indiana Derby and the Indiana Oaks.

The Indiana Derby is the premiere race of the racing season, inviting three-year old thoroughbreds for a 1 1/16 mile race with a purse of $500,000. This was the site of the first Triple Crown race winner to compete in a race within the state, when Preakness Stakes winner Lookin At Lucky took the 2010 event by length and a quarter.

The Indiana Oaks is a Grade Two race like the Indiana Derby, provides a $200,000 purse for top three-year old fillies at the same distance.

With a purse of $300,000, the Dan Patch Invitational is the richest quarter horse race taking place at Hoosier Park. This mile long race for pacers involves the top ten career earners for quarter horse racing.

Off Track Betting in Indianapolis

As the authority for horse racing and pari-mutuel betting within the state, the Indiana Horse Racing Commission oversees wagering and racing activities in Indianapolis and across the state. OTB locations in and around Indianapolis let players legally wager on horse racing events from around the globe.