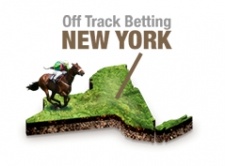 The history of Thoroughbred horse racing in the United States essentially began, like a lot of American history, in New York. Saratoga opened its doors in 1863 and is one of the oldest sporting venues to remain active in the country. New York is home to one of the most successful breeding and racing programs and has been the site of some of the greatest triumphs and defeats in horse racing lore.

Online racebooks make wagering on top races from New York and all across the world convenient for anyone with a computer or mobile device. In addition to being safe, secure and convenient, many racebooks allow patrons to take advantage of promotions, rebates and incentives that you cannot find anywhere else.

Belmont Park is one of the most historic and prestigious racetracks in the country and has been in operation since 1905. Fans have witnessed some of the most iconic moments in the history of the sport in Belmont Park’s long stretch including Secretariat’s tour de force Belmont Stakes victory as well as Ruffian’s tragic breakdown in a match race with Foolish Pleasure. Belmont Park hosts two race seasons – the spring meet and the fall meet.

Saratoga Race Course is the third oldest track in the country and has been a summer destination for horsemen and racing fans alike since 1863. Known as the “Graveyard of Champions”, the track has been the site of many upset victories. Saratoga races for six wins in the summer from the end of July to the beginning of September and boasts numerous Grade 1 events.

Aqueduct is the final piece of the New York Racing Association’s trifecta and races from November through March with some breaks in between. While most of their day to day racing is a cut below that found at Belmont Park or Saratoga, there are several major stakes races there including a key prep race for the Kentucky Derby – the Wood Memorial.

Also in New York in Farmington is Finger Lakes, a small track that exists separately from the New York Racing Association. The track hosts live racing from April through November.

While there are many major races held in New York, none are as iconic as the Belmont Stakes. The mile and a half race is the final jewel of horse racing’s coveted Triple Crown and has been the scene of many triumphs and even more crushing defeats. American Pharoah became the first horse to win the Triple Crown since 1978 in 2015 and the Belmont Park grandstand literally shook with enthusiasm from the crowd.

Saratoga holds numerous top tier graded stakes races over their short but thrilling season but the most important is the Travers Stakes. The Grade 1 event is restricted to three-year-olds and run at the classic distance of a mile and a quarter which earned in the moniker of “the Midsummer Derby”. Even champion American Pharoah was not immune to Saratoga’s curse of favorites and finished second behind Keen Ice.

Off Track Betting in New York

All horse racing in New York is under the purview of the New York State Racing and Wagering Board. They grant privileges for OTB sites and monitor the activities of racing facilities throughout the state. OTB sites allow bettors access to wager on horse races when fans are unable to visit the track.