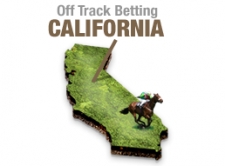 California has been one of the hotspots for horse racing in the United States for decades. Some of the biggest racing events in the world happen in this state, ranging from high-profile Breeders' Cup events to vital prep races for the Road to the Kentucky Derby. A variety of OTB sites provide pari-mutuel wagering services throughout the year. The Breeders’ Cup has been held in California eleven times – eight times at Santa Anita and three times at the now demolished Hollywood Park.

When you're unable to make it to the track, online racebooks provide an easy way to get in on the action for all of the biggest horse racing events in California. The best betting sites cater to their patrons by offering a solid array of bonuses and rebates, in addition to secure racing services.

The Alameda County Fair Grounds, close to San Francisco Bay, is home to the oldest one-mile race track in the United States – the Pleasanton Fairgrounds Racetrack, which was built in 1858. This facility still runs a variety of important horse races throughout the year. Big players from the east coast often bring their top thoroughbreds to the Fair Grounds to train during the winter season.

However, the most important race track in California is Santa Anita Park, which hosts the biggest and best races in the state. Originally called Rancho Santa Anita, the track hosted its first race on December 25th in 1934. Located in Acadia, this was the site of the United States' first $100,000 purse in February of 1935, when the inaugural Santa Anita Handicap took place.

The Santa Anita Handicap was the first marquee Thoroughbred racing event in California and the race has been the host to some of the greatest horses in history. In 1940, the incomparable Seabiscuit won the last race of his career in the “Big Cap” and since then, the race routinely attracts some of the best in the world. The race currently boasts a $1 million purse and a Grade 1 status.

The Breeders’ Cup is scheduled to return to Santa Anita for the 2016 edition of the championship event. The Breeders’ Cup consists currently of thirteen Grade 1 races, each with a purse of at least $1 million, run over the course of Friday and Saturday. The races attract the best horses from around the world.

The road to the Kentucky Derby often runs through Santa Anita as the track hosts one of the top and most influential prep races, the Santa Anita Derby. The Grade 1 race for three-year-olds offers a purse of $1 million and also awards 100 points towards a spot in the starting gate in the Kentucky Derby.

Off Track Betting in California

Off track betting in California takes place under the authority of the California Horse Racing Board, which was created by the state in 1933. As an independent body, they sanction horse racing and wagering activity surrounding these competitions. OTB betting locations allow you to legally enjoy gambling when you're unable to attend the facility that's running the race.