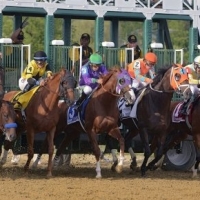 Brand new to the US racing calendar, the Pegasus World Cup 2017 is a unique invitational horse race that will offer the largest overall purse - $12 million - and the largest ever winner's share - $7 million - for a single horse race anywhere in the world. The race is unique in that starting spots in the gate have been pre-purchased by 12 prominent owners or owners' groups, who can then run one of their own horses, or lease or sell their spot to another stable wanting to start a horse. The 1 1/8 mile race in the dirt track at Gulfstream Park in Hallendale Beach, Florida is set to go Saturday, January 28, as the spotlight race in a card that will feature six other stakes or handicap races, including the $400,000 Posidon Stakes.

Given what is at stake and the quality of horses available to run, the Pegasus World Cup horse race is expected to generate huge betting pools, and likely huge payouts, with horses that would normally be race favorites sitting in double-digit odds because of the quality of the field.

Final entries have been taken, post position has been drawn, and the morning line odds have been set for the inagural running of the Pegasus World Cup. The race goes Saturday from Gulfstream Park, and will see the field racing 1 1/8 miles on the dirt course, for a world record $12 million total purse. In addition to the 12 comfirmed starters, three other horses are on the Also Eligibles list, and will draw into the race if any of the first 12 are scratched from the field before Saturday morning. Around the world, horse racing fans are puttting together a handicapping strategy of how to win their Pegasus World Cup bets, so here's a rundown of the field to help sort the contenders from the pretenders.

On paper, the Pegasus looks like a clear showdown between two of the top horses racing in the world right now, California Chrome and Arrogate. The four-time Eclipse Award winning California Chrome is the 2014 Kentucky Derby and Preakness Stakes winner, who boasts five other Grade 1 stakes victories on his lifetime resume, and 16 wins overall from 26 lifetime starts. His $14.5 million in lifetime earnings by far put him on top of the all-time earnings list. The Pegasus is likely to be the last race of his storied career, and his fans would love to see him go out a winner.

Arrogate, meanwhile, burst on the scene this past summer, when he come up from the allowance level ranks and destroyed a solid field (including Preakness winner Exaggerator and Belmont winner Creator) to win the (G1) Travers Stakes by 13 1/2 lengths, setting a track record in the process. His next start was the Breeders' Cup Classic in November, where he tracked down the front-running California Chrome in deep stretch to win by a half-length, handing that one his only loss in 8 starts for 2016. The Pegasus will be Arrogate's first start since the Breeders' Cup.

Given their obvious back class, it's clear those two are the solid favorites for the Pegasus. There are 10 others in the field, however, and as any racing fan knows, there is never a sure thing when the gates open and the race begins. Here's a full rundown of the field by post position, with ML odds.

1) Arrogate (7/5) Last Race: 1st, Breeders' Cup Classic - Unraced as a two-year-old, he broke his maiden in his second lifetime start in 2016 and hasn't lost in five tries since. Possesses freakish speed, will need to avoid getting trapped on the rail on the short run to the first turn.

2) Prayer For Relief (50-1) Last Race: 9th, Clark Handicap - Still racing at age nine, he has 45 starts to his credit and is a former graded-stakes winner, but he has not been in the winner's cirle in more than three years.

3) Neolithic (30-1) Last Race: 1st, Allowance - The best by nine lengths in his last start, but stepping way up in class here. Expected to be part of the early pace duel, and his two lifetime wins have come on the Gulfstream dirt.

4) Noble Bird (25-1) Last Race: 7th, Clark Handicap - Veteran runner has been competitive at the graded-stakes level with a Grade 1 win in 2015 and a Grade 2 win two starts back, is also expected to try for the early lead and hold on as long as he can.

5) War Story (50-1) Last Race: 1st Queens County Stakes - Looked promising as a three-year-old in 2015, but has not had any wins at the graded-stakes level in 10 lifetime tries.

6) War Envoy (50-1) Last Race: 6th, Allowance - Kentucky-bred has spent most of his career racing in the grass in the UK, where he has tried some top-rated company but has had little success, with only two wins in 21 lifetime starts.

7) Shaman Ghost (20-1) Last Race: 3rd, Clark Handicap - Ontario-bred winner of the 2015 Queen's Plate, he's a late developer who scored two graded-stakes wins in 2016, including (G1) Woodward. Seems to want more distance, but a solid contender for the bottom of the ticket.

8) Semper Fortis (50-1) Last Race: 6th, Malibu Stakes - Competive in the lower stakes level, he has only two lifetime wins, both in the claiming ranks, in 12 lifetime starts.

9) Keen Ice (12-1) Last Race: 3rd, Harlan's Holiday Stakes - Will forever be remembered as the horse that beat American Pharoah in the 2015 Travers Stakes, he was third in the Breeders' Cup Classic this year. An outside threat who, like Shaman Ghost, would have a better chance at 1 1/4 miles.

10) Breaking Lucky (25-1) Last Race: 2nd, Clark Handicap - The second Ontario-bred in the field, six-year-old has done most of his racing on the synthetic at Woodbine, although he has had good results in graded-stakes company in the US. Could get a piece.

11) Eregon (50-1) Last Race: 1st, Gran Primero (Argentina) - A star in his native country, where he has won multiple graded-stakes in taking 10 of 20 lifetime. A complete wildcard here, he could challenge for the win or finish dead last.

12) California Chrome (6-5) Last Race 1st, Winter Challenge Stakes - Despite the BC loss to Arrogate, if his connections learned anything from that race, he's simply the one to beat. All indications are that he's ready to make his last lifetime start a good one.

The Pegasus World Cup goes Saturday, January 28 from Gulfstream Park, with a post time of 5:40 PM Eastern. The race is being broadcast on NBC, starting at 4:30.