When one con man sets his mind to something, it may take an even more corrupt man to outsmart and defeat him. That’s the premise of this action-packed box-em-’up. Finally, a great movie about sports betting with a star-studded cast that DELIVERS.

Louis Gossett Jr, James Woods, Bruce Dern, Oliver Platt and a stunning Heather Graham take on the bulk of the acting duties in this 1992 film directed by Michael Ritchie. Boasting one of James Woods’ most memorable lines ever (“y’know the difference between a hustler and a con man?…”) it’s no surprise this film did so well.

Some quality low-life characters and classically colourful language sets the scene in this fictional Georgia town, where everyone participates in a raucous 24-hour boxing event after Gabriel Caine (Woods) shows up. 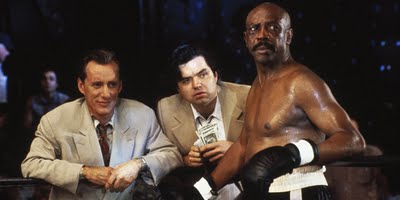 Gabriel Caine is a great con-man who, after just being released from prison, organizes an operation in which a local town will be released from the clutches of John Gillon (Bruce Dern) the city’s wealthiest citizen. Gillon had fixed a boxing match that permanently injured Diggs – the local boxing hero. Caine then bets him $100K that prize fighter Roy Palmer (Louis Gossett Jr.), can beat the county’s ten best pro fighters in under 24 hours.

The whole boxing-mad town gets involved and wagers as both sides begin to suss out their chances and start bribing people and planning their strategies. Meanwhile, Caine is dealing with gangsters to organize backing of his bets and romancing the sister (Heather Graham) of a big scary fighter he met in jail following the true, smooth-talking con-man, protocol. The stakes get huge as neither side wants to admit defeat.

Were James Woods and Louis Gossett Jr. able to pull off the Midnight Sting?

It is a thumbs up for this movie if you know what you’re getting into. Lots of excessive swearing and scummy characters are part-and-parcel of the film, so if that puts you off, you might not dig Diggstown. It is a decent comedy with vulgar yet amusing parts to it, mostly aimed a male audience judging by the level of machismo that oozes though your screen at every turn. The acting styles of Woods, Dern and Gossett Jr. (an academy award winner) are powerful and the driving force of this movie. You find yourself feeling sympathetic to all of their characters. Thumbs up to a great boxing and betting movie. 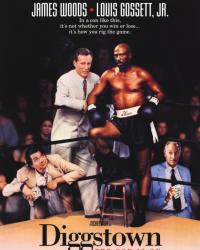