21 is a film starring Jim Sturgess, Laurence Fishburne, Kate Bosworth, Aaron Yoo, Kevin Spacey and Jacob Pitts. The movie opened up with mixed reviews, though in the first two weeks of its release, it was the number one film in the U.S. and Canada. 21 is an adaptation of the novel Bringing Down the House, which was a true story written by Ben Mezrich.

Due to MIT not allowing movies to be filmed on their campus, the scenes with MIT actually took place at Boston University. This includes the dorms, inside classrooms, the alumni reception and the gymnasium. There was also some controversy over the nationalities of the characters. In Ben Mezrich’s book, the main characters were of Asian American descent, but in the movie, they were Caucasian. The producers of the movie defended this by noting they simply chose actors (Jim Sturgess included) who fit those roles best, regardless of their nationality.

“21” starts with Ben Campbell, played by Bill Sturgess, as an intelligent student of MIT in Boston, MS. He has a desire to become a doctor, but can’t afford to get into medical school. To his luck, he meets professor Micky Rosa, a math professor that has a club of five other students. Ben learns that Rosa is teaching them how to count cards and master the art of Blackjack. They take a trip to Las Vegas to try their newly learned skills. In the beginning, Ben only wants enough money for medical school, but as so many of these stories go, he becomes greedy and arrogant, which gets them all in trouble. It is a movie filled with friendship, betrayal, greed and plenty of twists and turns.

While you feel resentment over friends of Ben’s that turn out to be less than honest, there are some surprises. The security guard intent on stopping their scam, turns out to only want to protect his own pension and family. Ben is almost scammed by one friend, but ends up scamming him in return. Finally, the very end shows Ben in a scholarship office explaining the entire story, followed by him walking into Harvard Medical School. 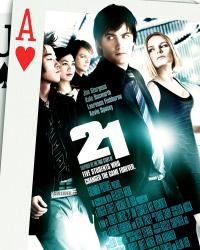