For those of us old enough to remember the golden age of cinematic Westerns, movies like 5 Card Stud are a treat that movie fans will want to re-visit thanks to great acting, big characters, suspense and a poker game featuring the highest of stakes. At its heart, 5 Card Stud is a Murder Mystery, not unlike a detective film, however the setting of a remote Western town adds a level of intrigue that makes the final showdown a nail-biting moment.

Movie fans are the big winners in 5 Card Stud. Western fans will enjoy the traditional scenery and macho characters while murder mystery fans will enjoy the “Whodunnit” nature of the story. Just as this movie is a combination of genres, the two lead actors are a combination of classic awesomeness. No one plays dark and mysterious better than Robert Mitchum, while Dean Martin oozes charisma each time he’s on film. 5 Card Stud is a 5-star winner in our opinion.

In 19th century Rincon, Colorado, a town along the Western frontier a poker game is taking place. Led by charming gunslinger Van Morgan (Dean Martin), the action builds until one of the players is caught cheating. Driven by rage, the other poker players “string him up” as a cheater, pushing Morgan and his objections aside. Morgan leaves Rincon, perhaps never to return. After some time, a gold rush hits Rincon, bringing in all sorts of characters – including brothel ladies and a mysterious preacher, Reverend Jonathan Rudd (Robert Mitchum).

When two more of the poker game players are murdered, Van Morgan returns to Rincon to investigate. His romantic attentions quickly turn to the brothel madam (Inger Stevens), but more murder victims lead him to investigate further what exactly is going on in Rincon. His suspicions lead him to confront the wild-card Rev. Rudd, but is he responsible? Nothing is truly as it seems in Rincon, but Jim Morgan is determined to get to the bottom of these murders. Morgan is about to discover however that trust is the one card you can’t play in 5 Card Stud.

Spaghetti and meatballs. Batman and Robin. Sure these two things go together well, but none of them can compare to Martin and Mitchum. Two of cinemas most charismatic leading men face off in 5 Card Stud, and it makes you long for the days before CGI zombie armies and fight scenes set to dubstep or heavy metal. Like all great 60’s Westerns, 5 Card Stud is at its heart a showdown between Alpha dogs, set in a one-street Western town. The actors and the story are the real attraction, so sit back, kick your boots up and get dealt in to 5 Card Stud. 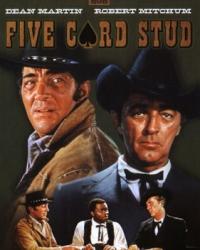