A Big Hand for the Little Lady: Movie Review

Adapted from a TV play, A Big Hand for the Little Lady is a fun, fresh and enjoyable classic that will have you laughing all the way to Dodge City. Featuring a hilarious performance from the “little lady” herself, Hollywood legend Joanne Woodward (Rachel Rachel, The Three Faces of Eve) as well as great supporting performances from the likes of heavyweights Henry Fonda, Charles Bickford and Burgess Meredith, this 60’s Comedy Western always feels like a play, but translates perfectly to the big screen.

Just like in a poker game itself, A Big Hand for the Little Lady lets it all ride until the final action, with a “kicker” you truly won’t see coming. We won’t ruin it for you here, but in a movie where the odds are seemingly stacked, the real action may have nothing to do with the cards. A film that’s relatively unknown to most poker players, A Big Hand for the Little Lady deserves a watch, and proves that sometimes the best way to learn a lesson is by sitting down at a poker table.

A Big Hand for the Little Lady film summary

Talk about a “fish out of water”! A Big Hand for the Little Lady begins by setting the stage for a high stakes poker game featuring five “Big Fish” players, including Henry Drummond (Jason Robards), Benson Tropp (Charles Bickford) and Ballinger (Paul Ford). As they are set to begin, in walks Meredith (the one-and-only Henry Fonda), his wife Mary (Joanne Woodward) and their young boy Jackie. Even as Mary begs him not to, Meredith puts down their life savings to join the game. One of the players says it’s alright, but only if Mary lets him.

Halfway through the game Meredith suddenly falls ill and is cared for by Doc Scully (Burgess Meredith). With his strength failing, Meredith tells his wife to take over for the final hand – with nearly $20,000 at stake. Playing the “clueless housewife” angle, Mary asks how the game is played. When Mary is told that she needs more money to stay in the hand, she goes across the street to get a loan for the hand and (after showing the banker her cards) gets enough for a raise. Faced with a true wild card, how will the final hand play out and is Mary truly just a poor, clueless little lady?

Is A Big Hand for the Little Lady a Treat for Ladies and Gentlemen alike?

An absolute classic in every sense of the word, A Big Hand for the Little Lady goes all in with a stacked cast and a poker game that they call the “Wildest in the West”! Unlike many 60’s Westerns, A Big Hand for the Little Lady is a hilarious comedy, so forget about the stare-downs, trigger-fingers and shootouts, in this classic film directed by TV-comedy legend Fielder Cook it’s more about knee-slapping laughs and a poker game unlike any you’ve ever seen. From the moment Mary takes a seat and says “How do you play?” you know you’re in for a laugh a minute. 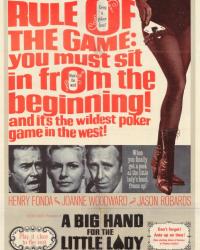