Atlantic City, USA is an Oscar-nominated movie that’s focused on gambling and the world of Atlantic City, New Jersey. Directed by Louis Malle, Atlantic City was released in 1980 to critical acclaim. It features Susan Sarandon as Sally who has just lost her husband and finds herself in the middle of a situation with the local mob. The character of Lou, played by Burt Lancaster, soon falls for her and becomes her hero. Kate Reid plays Grace, another fantastic character of the movie.

Atlantic City has been called one of the best movies of the 1980s and Louis Malle’s best movie ever. It even received a 100% on Rotten Tomatoes, which is extremely rare. Between the acting, directing, setting, soundtrack and writing, this movie deserved every award it was nominated for.

Atlantic City features two main characters: Lou (Burt Lancaster) and Sally (Susan Sarandon), with Grace (Kate Reid) and Sally’s husband Dave (Robert Joy) being supporting characters. The story starts with Lou, a small time gangster trying to make it big and Sally, a croupier in Atlantic City, both going through major transitions in their lives. Sally became a croupier after escaping from her old life in Saskatchewan, in an attempt to start over and reach her dreams of moving to Monte Carlo. All is going well until Dave shows up.

Sally’s estranged husband Dave arrives in Atlantic City, and seeks help after he steals drugs from mobsters. He gets Lou to help him sell them, but the mob kills Dave before the drugs are sold. Lou and Sally become close and Lou is the one responsible for getting revenge on the mob for her.  Atlantic City is a drama but has some romantic elements, especially between Sally and Lou, a very unlikely pair. In the end, Atlantic City is about having big dreams, regardless of what your current life is like, and doing whatever it takes to make them a reality.

Atlantic City was nominated for five different academy awards in 1980. While they didn’t bring any Oscars home that night, many fans of this movie believed they deserved each and every one. Burt Lancaster and Susan Sarandon were nominates for a Best Actor and Best Actress award, while the movie was also nominated for Best Picture, Best Director and Best Writing.

It didn’t win an Academy Award, but it did win the Golden Lion award at the Venice Film Festival in 1980. Atlantic City was also added to the United States National Film Registry in 2003 for being culturally, historically, or aesthetically significant. Susan Sarandon, Burt Lancaster, Kate Reid and many of the supporting characters give some stellar performances in Atlantic City. 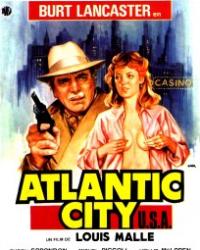