Bad Lieutenant was released in 1992 with decent reviews from experts and movie watchers. Harvey Keitel brilliantly plays The Lieutenant (his name is never given) who is dealing with a severe gambling and drug addiction, and throughout the movie trying to change his ways.

Before The Lieutenant can change his lifestyle and find the forgiveness he craves, he goes through a lot of chaos. From the very beginning of the movie when he drops his kids off at school and does cocaine in his car immediately afterward, you see the abuse The Lieutenant does to his body. With a stunning performance by Harvey Keitel, as well as supporting actors Victor Argo, Paul Calderol, Leonard Thomas and Frankie Thorn, Bad Lieutenant makes you see beyond a person’s bad choices and want him to find salvation as much as he wants it for himself.

Bad Lieutenant is a crime drama, but the main protagonist – The Lieutenant, played by Harvey Keitel – is anything but a hero. The corrupt cop sleeps with prostitutes, takes advantage of his authority, drinks copious amounts of alcohol, does drugs, and owes money to the mob due to his gambling addiction. He is an abusive and “bad” Lieutenant, who is attempting to investigate homicides and balance this life he has chosen for himself.

The Lieutenant doesn’t start to see the error of his ways until he begins investigating the brutal rape of a young nun (Frankie Thorn). When he begins questioning the nun and promising to chase these criminals down, she tells The Lieutenant she has forgiven them. This causes him to reevaluate his life choices, how he is affecting his wife and his own young children, and begins trying to make amends. Bad Lieutenant takes you on a journey from a man who is damaged to one who does whatever he can to try to make up for it. Because of the nun and her case, he begins asking Jesus to help him and forgive him.

The Lieutenant finds his salvation in the end

Although The Lieutenant has moments throughout the film where his drinking and drug use causes him to get out of control, he soon finds himself and a reason to ask for forgiveness and find a way to get help. By the end of the movie, The Lieutenant catches the two young rapists and takes them to Port Authority instead of arresting them. He puts them on a bus and tells them to never come back. Unfortunately, the final scene offers a jaw-dropping scenario where The Lieutenant hears the words “Hey, Cop!” before shots are heard. 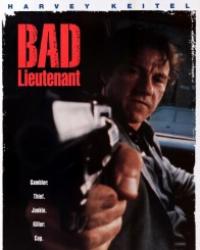