The movie that spawned a million remakes, Bob le Flambeur (Bob The Gambler) is a stylish and slick casino heist flick that audiences have delighted in for over 5 decades. Legendary director Jean-Pierre Melville admitted that Bob le Flambeur was inspired by Gangster flicks from the 1930’s such as The Public Enemy, Lady Killer and White Heat. The mix of French “cool” with Hollywood “gangland” is everywhere in this movie; from the “gang”, to the master thief to stolen riches.

There are no special effects or theatrics, just a tantalizing “Cat and Mouse” escapade between the police and a career thief. Now, one important thing to consider: this movie oozes French from its core. If you do not speak French, then make sure you watch the movie with subtitles. Then again, if you’re a big fan of casino heist movies, maybe learning French would be worth the gamble, n’est-ce pas?

Recently remade as Neil Jordan’s The Good Thief, and the inspiration for the remake of Ocean’s Eleven, Bob le Flambeur is a classic of the French movie style known as “Film Noir”. Directed by Jean-Pierre Melville, the legendary director of French classics such as Le Samourai (The Godson) and Breathless, Bob le Flambeur tells the story of Parisian career gambling-addict Bob (Roger Duchesne). An ex-convict with morals, Bob has seen better days; in the midst of a massive losing streak, he is near broke and in need of a change of fortune.

After talking with his casino dealer friend, he thinks he may finally have a way of striking it rich. The legendary Casino in Deauville (the “Queen of the Norman Beaches”) is flush with cash during Grand Prix weekend – and Bob thinks he knows how to get it. Partnering with a team of con-men, Bob sets in motion his plan to rob the Deauville. But it is not without complications: a young beautiful woman named Anne (Isabelle Corey) reveals Bob’s plan to a police informant. As the plan unfolds, the police are hot on his heels. He’ll need luck, a lot of it, to come out on top.

Is Bob le Flambeur worth taking a gamble on?

There’s a reason that the 1950’s is considered the “Golden Age” of the big screen; films like Bob le Flambeur are so visionary and original that it’s a must for any fan of cinematic history, or caper flicks in general. Widely ignored by many on this side of the pond, Bob le Flambeur was re-released in the early 2000’s so is readily available from most DVD shops or movie websites. French glamour and elegance is the main draw to this film, so if you’ve ever wondered where modern casino classic films get it form, search no farther than Bob le Flambeur. 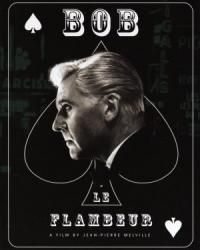