We don’t often advise taking pleasure out of someone else’s misfortune, but Casino Jack is a hilarious presentation of the Jack Abramoff story. Played to perfection by Kevin Spacey, Abramoff is an arrogant, yet shrewd, businessman and political lobbyist. The scenes where Abramoff trades favors for power are the movie’s strongest. The great cast includes Barry Pepper, Jon Lovitz and Kelly Preston, and does not disappoint.

As quick as Abramoff and Scanlon’s star ascends, the fall from grace is a spectacular thing to behold. What seems like a relatively innocent partnership quickly leads to the “s**t hitting the fan”. Where Director George Hockenlooper (who sadly passed away just before the film release) truly succeeds is in presenting a serious subject matter, ripped from the headlines, in a way that is still enjoyable for the audience, with hilarious jokes and situations.

Based on real events, 2010’s Casino Jack tells the story of Washington D.C. lobbyist Jack Abramoff, a businessman who had his hand in a lot of political pies. The amazing Kevin Spacey plays Abramoff, and from the first moment its apparent that he’s looking to get power by any means possible. Along with his business partner Michael Scanlon (Barry Pepper), Abramoff seeks to get rich, even beyond his own demented dreams, by using his political connections and curry favors for other rich and powerful connections. What could go wrong, right?

Unfortunately, in carrying out one of this scams, Abramoff recruits Adam Kidan (Jon Lovitz) a well-connected mafia goon. At first, it seems like the partnership with Kidan is really paying off: the money, yachts, cars and women come quickly and easily. However, in the always political world of Washington D.C., once word gets out that Abramoff is mafia-connected, the entire house of cards begins to crumble. As the pressure mounts, Abramoff and Scanlon’s lives take very sharp turns for the worse. Will the two survive the mafia-connections and political witch-hunt?

Do we really know Jack about Casino Jack?

Several years ago the story of Jack Abramoff took the national media by storm, as his fall from the highest levels of influence served as an illustration of what really goes on in the corridors of power. Most people were familiar with the general story, but Casino Jack reveals the entire sordid affair, and makes us laugh as it does. In a really funny twist of fate, Casino Jack was released on December 17, 2010, exactly two weeks after Abramoff himself was released from prison. 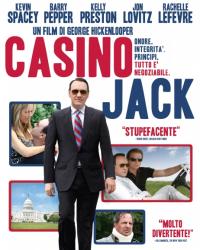