Casino is an award-winning crime drama released in 1995, and directed by Martin Scorsese. Nicholas Pileggi, who wrote the book the movie is based off of, also helped co-write the screenplay for the movie. It follows Sam, whose character is based on Frank Rosenthal who ran the Hacienda and Stardust casinos in the 1970s and 1980s. Other main characters include award-winning Sharon Stone as Ginger, Ace’s wife, and Joe Pesci as Nicky Santoro.

Casino is about Sam Rothstein who is an associate of the mob and moves to Las Vegas, NV, to run the Tangiers Casino. He is sent there due to gaming laws that allow him to work in the casino before his gaming license is approved. After he helps the casino get double their profits, the mob ask Nicky Santoro protect Sam and the casino. After a while, Nicky’s temper becomes apparent and he gets fired by the bosses. In the meantime, Sam falls in love with Ginger, a fellow hustler, played by Sharon Stone. They marry and have a daughter, but their relationship starts going downhill when she drinks heavily and gives money to her ex-boyfriend, a conman. Sam starts getting multiple enemies in La Vegas and gets in trouble with the city government. After several fights, Ginger attempts to leave Sam after stealing savings from their bank deposit box. She is arrested, followed by the bosses when the skimming operation is discovered. In the end, Ginger dies poor of a drug overdose, Nicky and his brother are buried alive from previous associates, and Sam just barely gets away.

At the time Casino was released, it was the eight movie that involved a collaboration between Robert De Niro and director Martin Scorsese. Others included Taxi Driver, Mean Streets, New York New York, Raging Bull, The King of Comedy, Goodfellas and Cape Fear. Casino was their final collaboration, and to some, their best. 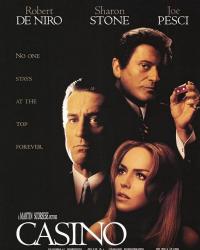