Clive Owen dazzles in this amazing story of gambling and the casino life. Croupier, directed by Mike Hodges in 1998, brings the gambling world on to film in a fresh and interesting way.

The perspective is through Jack Manfred (Owen), the main character originally from South Africa who, as an aspiring but unsuccessful writer,  gets sucked into the casino world.

The movie is classified as neo-noir due to the use of interior monologues found in the same style of early detective films of that genre. This fine film served as the launching pad for Clive Owen’s career in North America, where the film was warmly received.

As usual in any good gambling film, cheating the casino plays a big part of where the story takes Jack. Soon some undesirable characters squeeze themselves into the mix through temptation, sex, and the draw of easy and big money rolling in. When he takes a job as a croupier, Jack meets another dealer he knows is cheating the casino, and then sleeps with another attractive croupier named Bella (Kate Hardie).

Of course, these actions are against the casino rules and that is just the beginning of his bad behavior. Later he agrees to take part in a heist for the promise of easy money as all he has to do is raise an alarm when he spots cheating at his table. While juggling his love life with his career, Jack finds it is not easy to keep on the good side of the people that are important to him. The plot develops into a nice final twist at the very end.

Were Kate Hardie and Paul Reynolds Bandits at the Box Office?

The great thing about this production is no so much the acting, which was very good, but the atmosphere of the film and the intriguing development of the characters throughout. This is typical of great British films. It is enjoyable for any lover of good drama and a lot of gambling. Even being a high quality motion picture, it was released on TV/DVD in North America.  Interestingly, it was disqualified from the Academy Awards after it was shown on television in the Netherlands. But this effort from the director of Get Carter will keep the audience enthused, as it’s an easy storyline to get immersed in. It’s got everything. 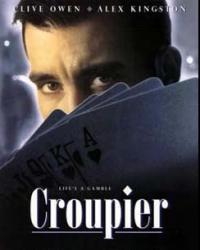