Deal (2008) is a drama about learning to play poker in hopes of winning the World Poker Tour Championship. In the film, Burt Reynolds plays an ex-gambler by the name of Tommy Vinson who is teaching a college kid, Alex Stillman (Bret Harrison) some tricks he has learned while playing poker. Before too long, Harrison’s character becomes his protégé, but also his toughest competition.

Deal is a movie that shifts from Tommy wanting to teach this young college kid how to be a champion poker player of Texas Hold-em, to the two partners having a falling out when Alex falls for Michelle (Shannon Elizabeth), a Las Vegas call girl. Aside from a great cast, Deal includes World Poker Tour commentators who play themselves, including Vince Van Patten, Mike Sexton and Courtney Friel. There are also celebrities in the film who are known professional poker players, including Isabelle Mercier, Phil Laak, Jennifer Tilly and Greg Raymer.

Deal’s protagonist is Alex Stillman, a senior at Yale who is adept as Texas Hold’em but wants to play with the big boys in Las Vegas. Just as he is dreaming of dominating the Vegas tables, he has a chance meeting with Tommy Vinson, a legendary poker player. While Tommy was once known by everyone in Vegas for his card playing skills, he has been maintaining a low profile for 20 years, in an attempt to live a normal life and save his family. But when he sees how much potential Alex has, he agrees to teach him what he knows and help him win the World Poker Tour.

The tables turn after they reach Vegas, and Alex becomes more interested in call girl Michelle, played by Shannon Elizabeth. This causes a rift between the two partners and they each go their separate ways. It isn’t until the World Poker Tour begins, that Alex and Tommy realize they are now going to be playing the tour and competing against each other.

A Las Vegas based movie for Poker Fans everywhere

While original critic reviews of Deal were less than par, even giving Burt Reynolds a Razzie Award for his performance, fans of poker enjoyed the movie. On Rotten Tomatoes, the user reviews are between 3 and 5 stars, proving fans of poker, gambling and Vegas-inspired movies enjoy it, regardless of what the critics have to say. Plus, the selection of real-life professional poker players, commentators and celebrity players make Deal worth watching. So, do not hesitate to rent this movie the next time you have a hunkering for poker and other gaming excitement. Even if you are not an avid gambler, this is still a fun watch. 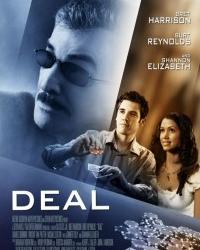