A stellar lineup acting out a fascinating true story makes for a great film, and Eight Men out does it well. A real treat for baseball lovers and those interested in sports gambling, this 1988 creation from director John Sayles portrays what can happen when gamblers actually get in and dictates the outcome of a professional sporting event.

In this case, that event is the 1919 World Series in a rare best-of-9 format between the Chicago White Sox and the Cincinnati Reds. This is a movie to check out whether you’re into history, the dark side of the sports betting industry, baseball films or just plain good acting.

Eight members of the greatest baseball team ever assembled, the 1919 Chicago White Sox, are paid by gamblers to play poorly and throw the World Series against the Reds. Much of the reason they accept the offer is the team’s cheapskate owner, Charles Comiskey, who is so tight he deducted uniform laundry bills from his players’ wages. Their discontent becomes known, and therein lies an avenue for corruption.

Some keen journalists look at the unusually high rate of bad plays from their team and begin to write of their suspicions in the newspaper. Meanwhile, since not all the players on the team were bought out, some in the group play exceptionally well making the gamblers and corrupt players uneasy. The accusations eventually force the league to look into the matter, and the legal drama unfolds right to the film’s emotional end.

Hit or a stikeout for John Cusack and Clifton James in the Box Score?

Many thought a movie about this subject would be cursed and could never become a success. That said, and even hough it didn’t achieve blockbuster status, Eight Men Out will stand the test of time as the best original picture version of what happened in the World Series way back in 1919. Being attached to such an infamous event, the subject alone is reason enough for it to be viewed for many decades to come. John Cusack puts in a fantastic performance as Buck Weaver while Clifton James was brilliantly cast as White Sox owner Charles Comiskey. D.B. Sweeney shouldn’t be overlooked for his role as the controversial Shoeless Joe Jackson. 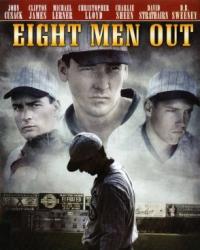