Even Money, released in 2006, is a quintessential gambling thriller focusing on the juxtaposition between between gambling addicts and those who make their living on these people’s backs. It shows in gruesome detail how life altering the gambling lifestyle can be, no matter which side the proverbially flipped coin lands.

Here and there decent bits of acting by stars like Ray Liota, Danny DeVito, Tim Roth, Kim Basinger, Kelsey Grammer, Forest Whittaker, Jay Mohr and Nick Cannon, will keep you tuned in to this drama replete with mystery and suspense. Mix in a degenerate gambler or two, a struggling novelist, an old detective, a casino magician, a bookie and college basketball player  – they all come together do deliver the simple message that gambling is a tricky profession.

Desperate handyman Clyde Snow (Whittaker) asks his NCAA basketball star brother to shave points in a game so that he can save himself from violent bookies. Meanwhile, Carolyn Carver (Basinger) is a writer working on her second novel who spends her family savings every night at the slot machines in the casino. When she meets magician Walter (DeVito), a relationship begins and the two feed off each other.

The big college game is the finale in which all of these characters have their fate decided. The lives of others are also heavily affected, such as Victor, the abusive and sadistic bookie played by Tim Roth, whose very life weighs in the balance of the outcome. In all, the stories of nine people collide during the climax of the film, in which the hyped of setting is a less-than-suspenseful game of college hoops.

Despite a cast of superstars this movie doesn’t shine very brightly. A huge problem is that, unfortunately, realism is largely left by the wayside in this film. The casino life and the bookie world are the two subjects that actually drive the film and they are the furthest away from any semblance of the real world. The message is that gambling can ruin your life, and of course it could, but a bit of overacting on several under-cast characters makes the movie a bust. Whittaker and Grammer are the only glimmering hopes this movie would ever have of being called acceptable, and that’s just not enough to overturn the thumbs down. 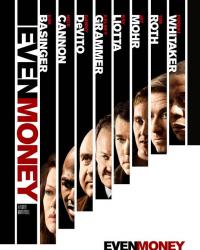