Fear and Loathing in Las Vegas is a dark comedy that was adapted from the novel in 1971, written by Hunter S. Thompson. The movie was written and directed by Terry Gilliam and stars Johnny Depp and Benicio del Toro. Fear and Loathing follows Raoul Duke (Johnny Depp) and Dr. Gonzo (Benicio del Toro) as they take a road trip across Nevada, pick up a hitchhiker, take part in psychoactive drugs and have many drunken adventures.

Fear and Loathing in Las Vegas is considered a failure according to their box office numbers. It only grossed $10.6 million in North America, which was well below their budget of $18.5 million. While it was a failure, it has become an iconic, cult film after being released on DVD. Fear and Loathing in Las Vegas earned a nomination for Terry Gilliam in 1998 for the “Palme d’Or” award at the Sundance Film Festival.

Fear and Loathing in Las Vegas seems to open on a scene that has almost nothing to do with the film, as clips of Vietnam and the Civil Rights Movements are played to a Lennon Sisters song. You then see friends Raoul and Dr. Gonzo speeding down the Nevada desert freeway after taking a psychoactive drug called mescaline.They pick up a hitchhiker along the way and tell him what they’re up to, as Raoul has been hired by a magazine to write an article about the Mint 400 motorcycle race.

They take numerous drugs along the way and go on adventures and crazy antics. The hitchhiker eventually leaves in protest of their drug taking, and they move on to the race. The drugs they take have prevalence over the movie, as it leads to numerous hallucinations and irrational thinking. They eventually check in to the Flamingo in Las Vegas, where they meet Lucy, played by Christina Ricci. Near the end of the movie, Raoul only knows what has happened during the heavily drug-induced trip because of a tape recorder he spoke into incessantly.

A Suitable Ending for a Cult Classic

At the end of Fear and Loathing in Las Vegas, Raoul drops Dr. Gonzo off at the airport and drives around the tarmac to park next to the plane. He then returns to the hotel and writes his article. At the closing credits, Raoul drives back to California to the tune of Jumpin’ Jack Flash by The Rolling Stones. 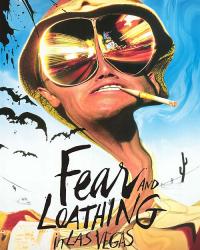