Notable for being one of the only films primarily financed by poker winnings, Freeze Out (2005) is an American independent comedy-drama film that centers on the life of one man who strives to get back at his close friends by besting them in their weekly poker game. Freeze Out is the feature film debut of director M.J. Loheed, who financed the the majority of the movie through his poker winnings (an estimated $15,000) and also wrote the screenplay as well. Loheed drew some of the subject matter of the film from his time in Los Angeles as an independent poker player and the interactions with his friends.

The name of the film comes from the poker term, freeze out, which refers to a common kind of poker tournament where you buy-in, but cannot rebuy in after you lose all your funds or chips. So once a player loses all of their chips, their evening is over. The film plays on this subject as the main character, John, uses this tactic to get back at his friends for their constant ribbing and teasing of him on a weekly basis.

Freeze Out premiered at the 2005 Westwood International Film Festival, where it won the award for Best Feature. In addition to its honor at the Westwood Festival, Freeze Out also was an official selection at the 2006 Cinequest Viewer’s Voice Festival and the 2006 Omaha Film Festival.

Set in present day Los Angeles, Freeze Out features Tom Sharpe (Life with Fiona, 2007), the main character in the film. John takes his mind off of the daily grind of living in Los Angeles by taking part in a weekly poker match with seven of his closest friends -- Sarah, Nick, Chip, Tim, Mary, Ed and Janice. While this does provide a momentary escape from his dull life, he still gets constant teasing from his fellow co-players as they make him feel insecure about himself. While his primary objective of playing poker is to relieve his stress, he ends up feeling more burnt out after each evening.

Unbeknownst to the other players, he starts training in secret to eventually stop their insults and get the best of them. After some time training in his spare time for the game, John ups the stakes away from their low-risk betting system to isolate and knock off his "friendemies." However, while the game is usually a fun time for the friends, it turns into a narrative on how friends truly can see each other when the stakes are high.

Freeze Out does a solid job in showcasing the daily lifestyle of struggling actors and comedians in Hollywood, while depicting the casual poker culture. What makes Freeze Out a relatable film is the banter between the players and how it is akin to what you would expect from your weekly poker game with friends.  Reviews on other movie websites like the Internet Movie Database (IMDb) indicate that Freeze Out has been moderately well-received (7.9/10) and rightfully so. With such a modest budget at around $30,000, the film does a great job at developing its characters and also showcasing the inner conflict that one goes through when they have to deal with stress in all aspects of life. Freeze Out is not the easiest film to find or download, but if you have the chance, then it is a definite watch.

While Freeze Out doesn't have the over-arching appeal of Swingers or the detailed poker jargon of Rounders, it does slide into the niche populated by millions of players everywhere: the definitive story of the casual weekend poker player. 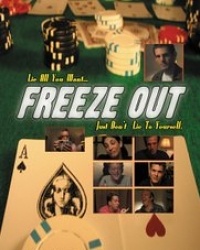