Written by Judith Rascoe, directed by Sydney Pollack and starring Robert Redford, Raul Julia and Lena Olin, Havana takes place in Havana, Cuba during the revolution of the 1950s. It stars Jack Weil (Robert Redford) who is a gambler in America and visits Havana to begin gambling there. He meets Roberta Duran (Lena Olin) and Arturo Duran (Raul Julia) and his life is soon changed.

Perhaps when the film was released, the audience wasn’t yet ready to discover what Cuba was like in the 1950s and during the revolution. It was set during this important time for Cuba and the revolution takes up the majority of the film. However on the other side, there is the romantic element between Jack and Roberta, the dramatic scenes of Arturo being taken away and Roberta, his wife, being tortured, before Jack rescues her. It is a movie that is great for adventurers who enjoy a cross between romance and history. The entire cast offers an outstanding performance.

In December 1958, Jack Weil is on his way to Havana, Cuba, to start a Poker championship there. Back in the U.S., he is a professional poker player and gambler, and has his sights set on Cuba. On the ship, he meets Roberta and falls in love with her, regardless of the fact that she is married to a revolutionary, named Arturo. Shortly after reaching Cuba and beginning to arrange his poker game, Arturo and Roberta are captured and tortured because they are supporting the revolution. Arturo is rumored to have been shot while trying to escape, but Jack is able to rescue Roberta.

Throughout the film, Jack struggles between wanting to be with Roberts, who is still intent on the revolution, and wanting to play the biggest poker game of his life. It has been compared to being the man he is and the man he could be. Fast-forward to January 1959 when the revolutionaries win the insurrection, the secret police flee and Jack decides it is time to leave Havana. Jack leaves Roberts behind and she is still strongly behind the Revolution, but the end of the film takes place four years later, as Jack is near the Florida Keys, hoping to someday see Roberta on the ship coming to the Americas from Cuba.

While the film had widely mixed reviews, everyone can agree that is has an exhilarating soundtrack. The musical score by Dave Grusin was nominated for an Academy Award, Golden Globe and a Grammy. To this day, it is still one of Dave Grusin’s legendary and memorable scores. With a very popular cast and a known director, this film has everything viewers want when it comes to the Cuban revolution. Even if you are not much of a history buff, this film is still exciting, entertaining, and a fun watch. 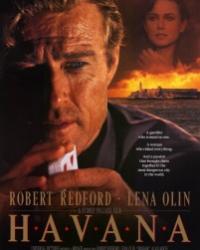