Released in May of 2003, High Roller: The Stu Ungar Story takes you through the life and trials of Stu "The Kid" Ungard, a renowned gambling prodigy who experiences a wide range of highs and lows and excess. The movie is a hybrid biography-drama—rooted in truth, but subject to the usual creative licenses and manipulations that aim to give it cinematic flair.The stars of this movie are Michael Imperioli, who plays Stu; Michael Nouri, who plays Vincent, a mobbed-up man who takes Stu under his wing and protects him from a very young age;

A.W. Vidmer was the director and writer of this low-budget film, which won a handful of festival awards and was rumored to have been shot in under 25 days.

High Roller: The Stu Ungar Story is told as a collective recountal, by Stu Ungar himself. You see how Stu was exposed to the gambling world by his father, who worked at a mobbed-up table-running club, at a very young age, before he was even a teenager.

Though Stu's father comes to protest his involvement in that life, Stu continues on, backed by mobster Vincent, who in addition to mentoring him, frequently comes to his aid whenever he owes money to what we're led to believe are mobsters.

Stu falls in love with Angela once he's older, and they move in together. But the gambling life gets to him. He is a whiz at gin—and inevitably poker—but is a sucker for betting horses and sports, drinking and prostitutes. He loses a ton of money on those ventures, which puts him into a $100,000-plus hole and, ultimately, costs him his relationship with Angela.

Out of options, Stu is sent to Las Vegas to compete in a Gin Rummy tournament with a grand prize of $100,000. He wins and is able to pay off all his debts. He then stays in Vegas, where he takes up No Limit Texas Hold 'Em poker, makes a steady living and wins a World Series of Poker title.

When Vincent passes away, Stu reconnects with Angela, who breaks off her current engagement and joins Stu Vegas. He repeats as the World Series of Poker Champion, and the two have a daughter, Nicole.

Stu comes off as a doting father, but the grind of a more traditional lifestyle gets to him. He loses a ton of money betting sports, continues his heavy drinking and serial relations with strippers and prostitutes, and even gets addicted to cocaine.

Angela inevitably takes Nicole and leaves, at which point Stu hits rock bottom. He is nursed back to some semblance of strength by a friend and fellow gambler.

The movie ends with him being staked in the 1997 World Series of Poker, 16 years after his last victory. He appears to be on good terms with his ex-wife and daughter—almost whole. He wins the $1 million grand prize while clutching a picture of Nicole.

After that, he's back in a hotel room, telling his story to a self-imagined grim reaper-type, who leads him toward death.

This move successfully connects on a number of fronts.

By its end, you really understand how self-destructive Stu Ungar was. You have the sense that he could win whatever card game whenever he wanted. You get the impression that, if not for the addiction to sports gambling and his side bets at card games, he could live a lush lifestyle.

Most importantly, you leave knowing that he was a true addict, someone indentured to a desire not necessarily to lose, but to always be right—to always be the smartest guy in the room, in every room, forever and ever, without respite.

But this film misses more than hits.

Important anecdotes always get lost in cinema, a give-and-take relationship between fact and convenient fiction you understand all too well whenever you see biopics or movies based off books. But the creative liberties taken here don't do the story itself justice.

You're left to assume so much; you needed to know Stu Ungar before seeing this movie. The Grim Reaper-type he speaks to throughout might have worked if it was clear that he was actually dying at the end. It was pretty easy to assume, but not until the credits did you know that he died in said motel room.

The movie also ends with an abrupt free fall. You know that Stu was somehow staked in the World Series of Poker, and that he had debts to pay; you can tell that much from the menacing henchman who darts to the front of the crowd after his victory. But you're never told that Stu fell back into his old habits after paying those debts.

Stu goes broke again, and dies of a self-inflicted heart condition that's the result of cyclical cocaine and alcohol abuse. You don't understand that's what happening, again, until the end credits. That's a big problem.

You should never unintentionally be left in the dark at the end of a movie. This was not a cliff-hanger. There was a clear, decisive, non-negotiable ending, and the film botched it, almost like the writer and director, A.W. Vidmer, spent too much time on the build-up to everything to devote adequate time to the falling action and conclusion.

Reading the One of a Kind biography, authored by Nolan Dalla and Peter Alson, provides a more authentic look at Stu's life—as does the subsequent, same-titled documentary done by ESPN. Warner Bros. owns the rights to the aforementioned book, and while nothing has become of it yet, maybe the world will one day get the better-detailed biopic of Stu Ungar it deserves. 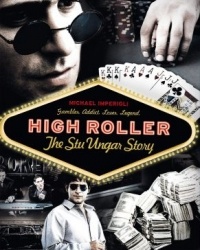