Kaleidoscope is a 1966 film starring Warren Beatty and Susannah York who play Barney Lincoln and Angel McGinnis, two poker players and adventurers who hop around to different gambling locations in London. Despite the fact that he is already wealthy, Barney Lincoln attempt to create a “kaleidoscope” pattern on playing cards that marks the cards during the manufacturing process, so he can win his games at different casinos and gambling places.

A young Warren Beatty takes over the movie, while Susannah York, who filled in for Sandra Dee, holds her character at a more modest level, though has a flashy element in her own right. The film was one of the first gambling-centric and romantic drama movies of its time and while it received average ratings from users and critics, it remains a great gambling movie for the 1960s.

Barney Lincoln is a wealthy American businessman who decides to go into the business of manufacturing playing cards. He uses master printing plates to mark the cards with a Kaleidoscope pattern that he can recognize during future games, in an attempt to win more games. His girlfriend, Angel McGinnis joins him, although she secretly has her own agenda. The daughter of a Scotland Yard detective, Angel needs to know why his card game is so good. Unbeknownst to Angel, Barney has marked his playing cards, and Scotland Yard knows about it. They break up in London, but get back together in Monte Carlo where the plot thickens.

It is here that Scotland Yard allows Barney to go unpunished if he helps them bring down a deep-in-debt narcotics dealer and casino owner, Harry Dominion. Without any options, Barney agrees to drain him of his money at the casino. The lives of Barney and Angel are put at risk if Harry figures out the scam.

One of the most impressive parts of Kaleidoscope, is the performance provided by the main and supporting cast. The role of Angel was originally supposed to be performed by Sandra Dee, per Warren Beatty’s request. However, director Jack Smight didn’t feel she was right for the part. He ended up getting his wish when Sandra Dee’s schedule didn’t permit the filming of Kaleidoscope and Susannah York replaced her, with a fantastic performance. Kaleidoscope was also the film debut of Jane Birkin, who played Exquisite Thing, and is still making movies today. Warren Beatty was near the beginning of his career with Kaleidoscope, offering up a classic performance depicting his wide range of skills that has remained consistent. 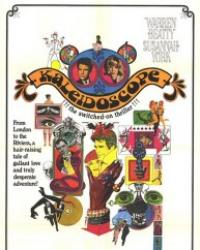