Tired of a sketchy — and at times, dangerous — lifestyle as a private dancer, Beth leaves her home in Florida to follow her lifelong dream of moving to Las Vegas and becoming a cocktail waitress. While in Sin City, Beth is introduced to professional sports gambler Dink Heimowitz, who hires her as his assistant. Turns out, Beth is actually a numbers whiz, which plays to her advantage in sports wagering where odds and stats are a premium.

Jeremy, a nerdy journalist from New York, begins developing feelings for Beth. However, Beth is more preoccupied with the thrills and fills of Sin City than settling down. As the unlikely duo of Dink and Beth begin racking up wins, their relationship suddenly becomes more than just business. With the romance heating up, Dink’s jealous wife, Tulip, demands the fling to end, forcing Dink into a me-or-her ultimatum. The tension and a cold streak eventually chases Beth away to New York.

While there, she rekindles her relationship with Jeremy and takes a job with Dink’s rival sports gambler Rosie. Dink warns her about Rosie’s sketchy ways and the illegal operation he runs out of Curacao, an island off the Caribbean coast. Things hit the fan as the operation threatens to throw Jeremy in prison and Rosie withholds all of Beth’s earnings, leading to winner-take-all stakes bet on a basketball game.

The strength of the movie lies in it's who's-who cast that features Bruce Willis, Rebecca Hall, Catherine Zeta-Jones, and Vince Vaughn. Each of the four have lengthy careers in Hollywood to their name, with many Academy Awards and Golden Globe nominations, and box-office hits.

Hall paces the movie as Beth, a former private dancer who heads toward glitzy Las Vegas in pursuit of an illustrious job as a cocktail waitress. The role is a far cry from previous roles as dead-serious characters such as in The Prestige and The Town. Nonetheless, Hall does a solid job as the corky and bubbling-with-energy Beth.

In Vegas, Beth stumbles into a sports betting ring run by Dink, played by Bruce Willis. Dink is a high-rolling professional bettor that spends his day and nights at sportsbooks, jumping on favorable odds any chance he gets.

Willis' character is a sharp departure from his action hero roles of the past. However, that's not a bad thing. The pivot is actually a breath of fresh air for the legendary actor. Willis, now past 60 years of age, actually seems believable for once in Lay The Favorite, as he gushes over wins and anguishes on losses. His acting chops in Lay The Favorite won't pad Willis' legacy, but it's the high point of the movie.

Zeta-Jones plays Dink's wife Tulip, who spends most of her limited screen time fuming about his growing relationship with Beth. While certainly not bad, Zeta-Jones appearance is largely forgettable.

However, Vaughn's character really falls short. As Rosie, a drug- and bet-binging junkie, Vaughn had a role that beamed with steal-the-show opportunity. Instead, the laughs are far and few between as Vaughn continues his drought of not-so-funny-man shortcomings.

The film really captures the seedy world of Las Vegas, a city built off of gambling and sex — the two central plot points. While the story and characters are far from authentic, the wagering aspect of the movie is dead-on. Bettors will love the bookie dialogue and details that run deep throughout the movie.

However, the film really suffers from a core theme. The whole movie is a mixed bag of romance, comedy, gambling, and adventure. Neither of the four categories shine above the rest. By dabbling in all four, director Stephen Frears doesn't commit enough to anything to really give the film a sense of identity. Frears fared far better in previous film such as The Gifters and The Queen.

With so much talent on screen and behind the scenes, Lay The Favorite fails to live up to the expectations. Beyond an A-list cast, the cupboard is bare. It's a comedy without the knee-slapping laughs. It's a coming-to-age story without much thrill. It's a fun plot devoid of surprise. 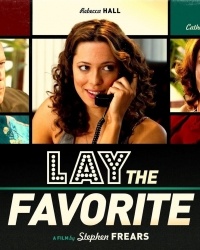