Leaving Las Vegas is a film that was released in 1995 and stars Nicholas Cage, Elizabeth Shue and Julian Sands. It is a romantic drama based around Ben Sanderson (Nicholas Cage), an alcoholic screenwriter who lives in Hollywood, CA. He loses everything because of his alcoholism and makes a trip to Las Vegas, where he meets a prostitute named Sera (Elizabeth Shue). Leaving Las Vegas was nominated and won several awards and has held in its place in cinema history as a great drama set in the bright lit- Las Vegas.

Leaving Las Vegas opens up with Ben Sanderson being caught up in his alcoholism, losing his job and his family. He makes the decision to drink himself to death in Las Vegas. Doing just that, he ends up on the Las Vegas Strip, where he meets Sera, a local and hardened prostitute. Over the course of a few weeks, their relationship develops, somewhat oddly. They start off stable, but eventually lead to resenting each other over their personal decisions. Ben has problems accepting the fact that she is a prostitute, while Sera is resentful of his drinking problem. After he refuses to get help, Ben gets drunk and brings another prostitute, played by Mariska Hargitay, to Sera’s house, after which Ben is thrown out. By the end, the love between them is made obvious.

Perhaps the most touching part of Leaving Las Vegas, is the chilling ending. After breaking up, Sera is accosted by three college students who rape and beat her. After being released from the hospital, she returns to Ben, who is currently on his deathbed. They spend the night together, and Ben dies just after speaking the word “Wow” when he realizes she accepted him the way he was. Nicholas Cage gives a phenomenal performance.  The realism comes in part due to the fact that he spent two weeks binge drinking on location in Dublin and interviewed several career alcoholics. Locations for this film were in Las Vegas, Los Angeles, Burbank, Laughlin, and Canada. 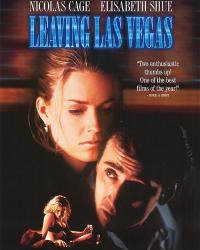