Sports bettors the world over know it all to well – the streak. When betting your hard-earned money you always want the winning streak to continue forever. In sinister cases, corrupt officials, insider information or game fixing are what give you that upper hand when dealing with the bookie. Sometimes your handicapping skills are on fire and other times that streak of a lifetime is brought to you by your best friend “Lady Luck”. Either way, it’s a welcome phenomenon we’ve all experienced in our lives whether in the sports betting realm, or simply on a good day.

Meet Trotter the cab driver from Florida (played by Richard Dreyfuss), who goes on an epic winning streak at the race track unlike any other. Hilarity mixed with an entertaining cast gives everyday gamblers a good laugh with this cheerful Joe Pytka-directed tale of gambling success.

When Trotter is tipped off by his cabbie friend Looney (David Johansen) that a horse is a sure thing to win an upcoming race due to the unethical practice of its owner, he hits the race track and places a $50 bet. When it comes through and earns him more than $700 he takes charge and continues to bet his winnings time and time again, turning an average day into a ‘very good’ one, so he tells his wife.

While trying to convince his wife he knows what he’s doing, Trotter wagers the $68,000 he won throughout the day on the final suspenseful race, which comes down to a photo finish. The main characters have all by this time made the resolutions to their hilarious problems including Looney, Trotter’s wife Pam (Teri Garr), Vicki the rich woman who tries to seduce Trotter, and the betting ace himself.

Was it a magical box office ride for Richard Dreyfuss and Teri Garr?

Though seemingly overshot and and marred with unflattering jump cuts and questionable editing, Let It Ride pulls through with straight up great quality humor. It is one of the few feel-good gambling movies out there. All the oddball characters in the film, from the regulars at the bar across from the race track, to the upper-crust members of the Jockey Club provide hearty laughs. Also, Robbie Coltrane plays a solid bookie who scoffs at Trotter initially but cheers him on by the end. Although somewhat forgettable, in that as a whole the movie doesn’t meet out Triple Crown expectations, it’s certainly an unforgettable performance by Richard Dryfuss. 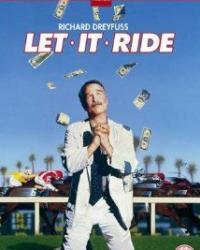