Hilarious, violent and witty – Lock, Stock & Two Smoking Barrels propels you through the streets of London chasing drugs, money and the bad guys who took it all away.

This heist film stars Eddy (Nick Moran) as a card sharp who loses half a millions pounds to a powerful and scary crime lord who scammed him in a game of three card brag, the classic British 16-century card game.

When Eddy gathers his three friends to find a way to get the money to pay his huge debt back, they embark of a frightening trip to all the corners of London, where undesirable characters and shocking events await at every turn.

A gang of four decide to rob another gang of four as they return from a drug dealer’s house, where they originally stole wads of cash and bags of drugs. Beforehand, they acquire two antique shotguns, who are frantically trying to be recovered from their rightful owner, yet another fearful character and crime lord. What ensues is a fast-paced plot-twisting tale linking all the characters to the storyline with heart-pounding intensity,

Some want their drugs back, some want money, some want their guns back, and all want to survive and come out on top. Unfortunately there are too many bad guys involved and too many weapons for that to happen. As the shotguns, drugs and money change hands back and forth, the plot leads to a cliffhanger ending, where one of Eddy’s pals is faced with a decision not knowing how serious the implications.

Did Jason Flemyng and Dexter Fletcher smoke the Big Screen?

In this masterpiece from director Guy Ritchie, the audience gets to follow the trail of drugs and money in a one-part unpredictable, two-part hilarious story of the criminal London underworld. Vinnie Jones is a stud playing a debt-collector nobody would want to mess with, an Alan Ford does a great job as narrator.  All in all, it is a great cast full of accomplished British actors accompanied by a phenomenal soundtrack that rivals the very best in the business. During the movie you hear the likes of James Brown, Stretch, Dusty Springfield, Stooges, Pete Wingfield, Robbie Williams, Castaways and The Stone Roses. 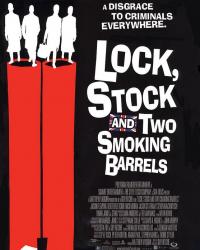