Luckytown (2000) is a drama that is based partly on the road, but mainly in Las Vegas. It stars Kirsten Dunst as a woman named Lidda, who has just turned 18. She is on a mission to go from her home in Southern California to Las Vegas in search of her gambling father, Charlie (James Caan).

This film is better than some of the critics reviews’ claimed it to be. While it does jump around a bit, causing slight confusion as to what movie you’re watching, it all comes together in the end. Possibly the most notable performances were delivered by Vincent Kartheiser and Kirsten Dunst. James Caan delivered a decent performance, though not his best. The growing friendship and relationship between Kirsten Dunst and Vincent Kartheiser is more emotionally present than that of Lidda and her estranged father. All in all, it is a decent movie with minor plot twists and solemn ending.

Luckytown starts with Lidda Daniels, who has just turned 18 and is unhappy living in Southern California without a stable family. When she received a birthday card and check in the mail from her estranged father, Charlie, she decides to track him down in Las Vegas. Lidda begins her drive to Vegas, picking up a video store clerk and card player along the way, named Colonel. While the two of them have dreams to chase in Vegas, neither of them ends up in a happy ending, as is expected in a comedy-drama.

Once they get to Las Vegas, occurring near the end of the movie, the two separate so Lidda can look for her dad. As this is occurring, Colonel finds a high-stakes poker game, and to hi surprise, wins against Tony (Robert Mariano). Unfortunately for him, Colonel deals with the onslaught of winning such a big hand. Luckytown isn’t so much about finding a happy ending or resolution, as it is the adventure and lessons learned along the way.

Luckytown is Known For Its Poker Scene

Near the beginning of the film we get a memorable poker scene, which is the first glimpse that this is a genuine poker movie. During this scene, Vincent Kartheiser and James Caan are playing a game of cards against each other. In what is supposed to be a highly dramatic scene, it becomes slightly comical as it is obvious one player is playing five-card draw while the others is playing Texas hold ‘em. Despite all of this, the movie still brings a ton of excitement, excellent dialogue, and plenty to enjoy. Poker lovers find this movie in their all-time top-ten lists because of the cast, the storyline, and the involvement of poker players. 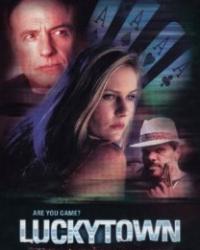