Maverick,  the film, is an adaptation of the television series Maverick, both of which feature James Garner. Mel Gibson plays con man and gunslinger Bret Maverick in this Western, while Jodie Foster plays suspiciously nice Annabelle Bransford. Alfred Molina is also in the film playing Angel. Maverick was written by Roy Hugging, who was also a writer for the original television series.

Maverick goes through not only the poker game, but a variety of cons, games, stagecoach chases and gun battles. As is true for most Westerns, there is a romantic entanglement thrown in, though the movie is in no way based on that. The relationship between Maverick and Annabelle is simply there for filler and as a way to entice a larger audience. While the plot of Maverick seems like a drama, it actually includes quite a bit of comedy and downright silliness, making it more family oriented than most Westerns.

Maverick is set in the American Old West and leading up to a five card draw poker tournament. The main character of Maverick is Bret Maverick, played by Mel Gibson. In the beginning of the movie, Maverick rides to Crystal River looking for money owed to him, so he can pay the substantial entry fee for the poker tournament. This is where a lot of the supporting characters come in, including James Garner as Marshal Zane Cooper, Jodie Foster as Annabelle Bransford and Alfred Molina as Angel. The adventures continue as games are played, cons are had, and Maverick is all the while trying to get enough money for the tournament.

By the time the tournament arrives, Maverick, Angel and Annabelle are competing against each other. Annabelle is the first to be eliminated, leaving Maverick and Commodore Duvall (James Coburn) going all in. Maverick wins the game, which outrages Angel, but he is shot down before he can shoot Maverick. Several more plot twists appear before the end of the movie, including betrayal, more cons and a big surprise by Annabelle.

Maverick continues to be a success after its box office debut

Not only was Maverick a popular movie when it first opened in 1994 and earned more than $180 million while in the theatres, it continues to be a favorite Western among many. Maverick was also nominated for an Academy Award for Best Costume Design, due to the highly detailed period costumes worn throughout the film. Roger Ebert gave it 3 out of 4 stars and it is rated a 74% on Rotten Tomatoes. Part of the reason for its popularity is due to being family-friendly, comedic and drama all tied into one movie. So, the next time the entire clan sits down for a family movie night, consider renting this entertaining movie for a fun-filled time. 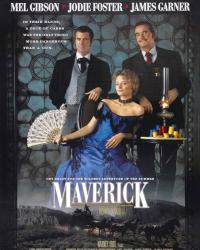