It’s rare that a movie about ex-convicts, divorcees and massive thefts can be viewed as light-hearted, but that’s the exact tone Ocean’s Eleven sets right from the opening scene. As a realistic examination of crime in Las Vegas, Ocean’s Eleven is a slight stretch. However. as a slick buddy movie about revenge, it passes with flying colors.

At its heart however, this is a movie about Danny Ocean (George Clooney) trying to balance the need for revenge against his desire to reconnect with his ex wife, a balancing act that the film nails.

Sure there will be times where you’ll wonder about the way they portray Vegas and how business is done at the “mega-casinos”, but if you just let the big name cast do their thing and watch how the thrilling heist unfolds, you’ll leave the theater with a smile on your face.

A remake of the 60’s Rat Pack classic, the 2001 version of Ocean’s Eleven ups the ante over the original with an all-star cast including some of Hollywood’s biggest stars; George Clooney plays Danny Ocean, a recently released convict intent on pulling off the biggest heist in Vegas history. Enlisting the help of Rusty Ryan (Brad Pitt), Linus Caldwell (Matt Damon), Reuban Tishkoff (Elliott Gould), Saul Bloom (Carl Reiner) and other big name team members, Ocean and his team set their sights on a trio of Las Vegas Casinos.

The Bellagio, the Mirage and the MGM Grand, all of which will be flush with cash during the biggest boxing match in years between Lennox Lewis and Wladimir Klitschko, are the targets. For Danny Ocean, however, it’s not just business: the owner of those three Casinos is none other than Terry Benedict, who just so happens to be involved with his ex-wife Tess – played by Julia Roberts. Ocean wants the cash in without making a bet – and he wants his wife back.

Does the Biggest Theft Job in Vegas’ History Really Steal the Show?

Pulling off the heist takes a Herculean effort by Ocean’s Eleven, involving tapping into the Las Vegas power grid, posing as casino employees and breaking in to the most secure vault Vegas has ever seen. Along the way, Ocean looks to not only score millions in cash, but also retake the heart of his ex-wife. Does the team pull it off? Just like hitting Blackjack, Ocean’s Eleven pays off for movie goers. George Clooney is his usual charming self, while the supporting cast is full of scene-stealers. The execution of the heist is as confusing as the rules for Craps play, but the movie’s climatic scene is a treat. Not only does the 2001 edition of Ocean’s Eleven do the original justice, in many ways it’s a superior film. Ocean’s Eleven is well worth the watch! 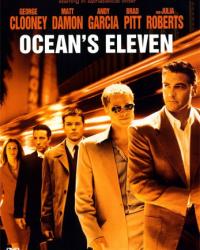