Three may be company, but when it comes to Las Vegas caper flicks, Ocean’s Thirteen is in a class all itself. The final movie in the Ocean’s Trilogy goes all in with an even bigger cast, including the one and only Al Pacino. Wisely moving on from simply getting a bigger payday, Ocean’s Thirteen instead has the feel of a buddy-flick, where everyone wants to get revenge for one of their members. The plot moves along nicely, even with so many cast members.

Ocean’s Thirteen is decidedly slick in its presentation, the cool just oozes on screen. With a cast featuring some of the biggest named stars in Hollywood, Ocean’s Thirteen in some ways feels like watching the best party Vegas has seen in years. Brad Pitt’s performance trumps the other two movies, while George Clooney plays ringleader like no one else. As the third time playing the role, each member of the team owns their role, setting viewers up for one hell of an entertaining journey.

What’s the only thing that’s a bigger motivation than money? How about revenge? When Ocean team member Reuben Tishkoff (Eli Gould) is double crossed by business partner Willy Bank (Al Pacino) right before they open their own casino, suffering a heart attack in the process, Danny Ocean (George Clooney) and team decide to get some sweet old revenge on Mr. Bank. Help comes from the unlikeliest of sources for Ocean’s Team, as their old enemy Terry Benedict (Andy Garcia), joins the plan to settle his own vendetta against the rival casino owner.

With Bank’s newest casino – “The Bank” – set to open, Ocean and his all-star team of conmen, including Rusty Ryan (Brad Pitt), Linus Caldwell (Matt Damon) and newcomer tech wiz Roman Nagel (Eddie Izzard), focus on opening night set events in motion. The first part of their plan is to prevent The Bank from getting a prestigious award while the second part is to have casino players receive simultaneous jackpots totaling $500 million, which will force Bank to resign as chairman of the casino’s board. Even for Ocean’s 13 that’s an ambitious plan. Will it work?

Are we hitting or standing on this Ocean’s series remake?

If you’re trying to decide if you want to watch Ocean’s Thirteen, we have just one question for you: do you like fun? Harkening back to the glory of yesteryear’s blockbusters, Ocean’s 13 is an entertaining caper flick that brings you along for the ride. Having fun is the name of the game and as the third film in series set in Las Vegas, the city almost feels like one of the characters. Setting up such a convoluted plot may seem like a lot of work, but for this team of close-knit master-thieves, they almost seem like they’re playing with the villain, and winking at the audience as they do it. 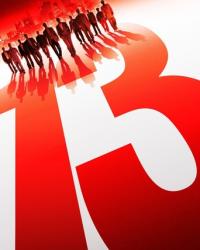