Here’s some quick math: take eleven of Hollywood’s hottest actors, toss in two seriously hot leading starlets in Julia Roberts and Catherine Zeta-Jones, one French heel and one seriously ticked off Las Vegas Casino owner and what do you get? A sequel to 2001’s blockbuster Ocean’s Eleven that is actually awesome. 2004’s Ocean’s Twelve takes its action to Europe, but in this version there’s more than one character trying to cross Ocean.

While George Clooney’s portrayal of Danny Ocean remains the pivot point for all story-lines, we get to know the rest of the team members more than in the first film. In a movie with so many moving pieces, adding new cast members can be a gutsy call, but with seasoned actors like Zeta-Jones and Vincent Cassel, Ocean’s Twelve pulls it off with aplomb. In some ways, the heist itself is almost a mirror of the original movie, however setting the job in the world of Europe’s Art gives it a nice twist.

Fresh off the biggest heist-job in Vegas history, Danny Ocean (George Clooney) and his team of 10 con men including Rusty Ryan (Brad Pitt) and Linus Caldwell (Matt Damon), were hoping to enjoy their time in the sunshine, but unfortunately the man they ripped off, Terry Benedict (Andy Garcia) is not one to just roll over. Benedict visits each team member to let them know they have 2 weeks to repay the stolen money – with interest. Getting 160 million was nigh-impossible, how the heck will they come up with 190 million dollars.

Realizing that the heat is already too hot in the U.S., the team organizes three separate heists in Rome, Paris and Amsterdam. As if that weren’t enough to deal with, a new rival, a master-thief named the Night Fox (Vincent Cassel) does the job before them to one-up Ocean, and a Europol agent (Catherine Zeta-Jones) is watching them closely. It’s a race against the clock to pull off three of the biggest art heists in history. Will the team manage to work as a team long enough to pay Benedict back, or are their days numbered?

Does Ocean’s Twelve one up the original or take a step back?

When it comes to sequels you can either go big or go home, and man oh man does it ever seem like Goerge Clooney doesn’t like to go home. 2001’s Ocean’s Eleven was one of the biggest heist movies in terms of scale and glamour the cinematic world has ever seen, and yet somehow 2004’s Ocean’s Twelve ups the ante with beautiful European scenery, and our favorite scenery, Catherine Zeta Jones. The plot is even more complex than the first movie, but once you wrap your head around it, the suspense and thrills truly pay off – with interest. 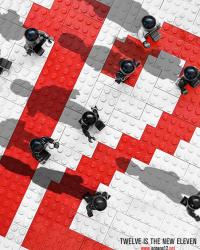