A true story about Canadian bank employee Philips who skims large amounts of money for himself and takes it to Atlantic City for weekly gambling excursions, Owning Mahowny is a refreshing account of what happens when crime fuels a gambling addiction.

Directed by Richard Kwietniowski, Owning Mahowny debuted in 2003 and was rated as one of the best ten movies of the year by film critic Roger Ebert.

When Toronto bank employee Dan Mahowny gets promoted from regular bank employee to assistant branch manager, he gets access to many large accounts and he’s given the responsibility of approving loans. Mix that power with a severe gambling addiction and something is bound to go wrong. As he racks up growing debt with his bookie Frank Perlin (Maury Chaykin), he starts approving loans to non-existent clients.

Vicgor Fox (John Hurt) is the manager of Dan’s favorite casino and becomes his enabler, helping him transfer the illegal money while treating him like a king and providing him with high-roller comps. Not long after, and just as his debts become too large to be kept under control, Dan’s wife Belinda (Minnie Driver) learns of his secret life. Soon his pathetic life unravels as the prospect of a prison sentence looms larger.

Though it didn’t rake in hundreds of millions, Owning Mahowny is a great interpretation of the real events that depict a desperate man trying to keep his desperate life in control. And in acting this out, Hoffman plays the character perfectly. It is not happy movie, but a story of one man’s misery as he struggles through denial, lying, stealing and gambling addiction. Being based on a true story is what gives this film all the credence in the world. You can’t criticize the way is rolls out, as this is the way it really happened. Great direction and an interesting storyline reinforces the perfect casting job. Solidly entertaining, Owning Mahowny is worth a watch 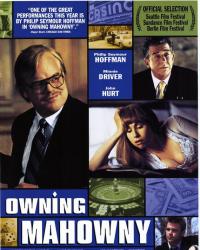