The developing relationship between the two brothers will have you wiping away the tears; whether it’s Charlie remembering when Raymond sings The Beatles, or when you’re wondering if Raymond will end up back in a padded room. An unexpected gem, Rain Main was a smash hit in 1988 with both critics and audiences alike. It stands the test of time as a classic film about the importance of family and judging a book by its cover.

Charlie Babbit (Tom Cruise) is a West Coast hustler who makes a living taking advantage of others – whether it be by selling cars at a sweet markup or acting as a bookie – and has always been that way. When Charlie finds out that his estranged father has died, he can practically count the dollar signs. Unexpectedly for Charlie, however, his father has only left him roses and the old convertible that he once stole as a teenager. So where is the rest of his father’s money? Charlie’s search leads him to the Walbrook Institute, where he meets his brother Raymond for the first time.

Although he suffers from autism, Raymond is a genius savant, able to process information in a way that dazzles Charlie. In an effort to get Raymond’s $3 million inheritance, Charlie kidnaps Raymond and takes him on a cross country trip to experience all that life can offer. Their journey takes them to unexpected locations, including a memorable trip to a casino, where Raymond’s brilliance is on show for all to see. Although the trip begins as a chance for Raymond to see the world, along the way Charlie becomes the one who realizes what life is truly all about.

Is Rain Main Worthy of its title as a modern day Classic?

In this day and age, a movie like Rain Man might fly under the radar as there aren’t any big explosions or transforming robots to be found. The pace resembles the journey the brothers find themselves on, relaxed and explorative. Still, Rain Man never drags, and although we know where the movie is headed, it’s a fun trip to be on. The scenes where Hoffman gets to let his Raymond interact with the “common folk” are the movie’s strongest, and the Blackjack scene alone is worth the price of admission. 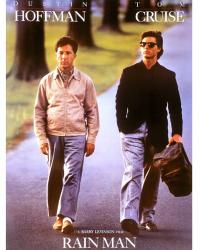