In this remake of It’s a Mad Mad Mad Mad World (1963), a casino magnate in Las Vegas sets up a race where the winner gets $2 million for winning. The race involves six gold coins held in different slot machines of his casino. The contestants in the Rat Race must get out of a locked space in New Mexico, get to Las Vegas and find the coins. Directed by Jerry Zucker, who also directed Ghost (1990), Rat Race is a very loose remake of the comedy in 1963.

Rat Race has an all-star cast, which adds to its appeal, including Cuba Gooding Jr., Rowan Atkinson, Whoopi Goldberg, Lanei Chapman, Breckin Meyer, Jon Lovitz, Kathy Najimy, Seth Green, Kathy Bates, Dean Cain and many others. The movie has excellent comedic timing and as much crudeness as is possible for this type of movie.

Donald Sinclair (John Cleese) owns the Venetian casino in Las Vegas and decides to play a game with his hotel’s high rollers. He places 6 gold coins in different slot machines of his hotel and anyone who has won a coin is invited to the game. He gathers the high rollers together to introduce a final win of $2 million in a duffel bag. The high rollers are split into teams and each one is given a key to the locker, where they must race to get it. What they don’t know is that there are bets placed against them as no rules are placed whatsoever.

Each team goes through a series of trials, some taking hot air balloons, others trying to take a plane and even more stealing monster trucks. Characters are stranded in the desert, riding on buses with mental patients, and even going on foot. This movie has off-the-wall remarks, crude jokes and comedy that almost crosses the line at times. By the end of the movie, the racers left follow the money tied to a balloon until it reaches a charity concert, where they reluctantly offer the money to the charity. The racers go one step further by convincing Sinclair to match this with some of his own money.

Rat Race is packed with All-Star cameos and reunions

Many people remember Rate Race for the cameos. At every turn, there is a surprising cameo by a celebrity or non-celebrity. Attorney Gloria Allred, wrestler Diamond Dallas Page and his wife, and Zucker’s mother Charlote all make appearances. It is also the fourth movie featuring Whoopi Goldberg and Kathy Najimi. The supporting cast is undoubtedly the star of the show, as the racers run into dozens upon dozens of people in the streets, airports, casinos and other locations throughout the race. If you are looking for a film with plenty of stars, comedy, and great dialogue, then you have found it with Rat Race. Give this movie a shot right now! 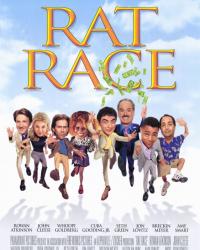