Adapted from a Luc Besson screenplay, Guy Ritchie’s Revolver offers all the things we’ve come to love about Ritchie’s films: hyper-stylized action, fast-paced dialogue and intense, consequence-laden story developments. Ritchie’s muse, Jason Statham, once again stars in this film about an ex-convict hell-bent on revenge. And what better way to get revenge than by beating your foe at a casino table?

As with most Guy Ritchie films, the supporting cast is filled with surprising names, in this case most notably Andre 3000 from Outkast and Vincent “Big Pussy” Pastore, who are amazing as Jake’s protectors. Ray Liotta plays the perfect villain, a casino owner who really doesn’t know how to play, but never loses because everyone’s scared of him. As the tension builds to a fevered pitch, moviegoers are left guessing up until the final moments if Green gets his revenge, or if time catches up to him.

Jake Green (Jason Statham) is a recently released convict who just served a seven year prison term thanks to mafia gangster Dorothy Macha (Ray Liotta), who also murdered Jake’s sister-in-law in cold blood. While Green stewed in prison, he learned the rules of deceit and gambling, so only two years after his release, he’s become quite the wealthy man and ready to plot his revenge. Confronting Macha on the casino floor, Green beats him soundly and takes every chance to add insult to injury, leaving him embarrassed enough that Macha immediately puts a hit out on the ex-con.

Making matters worse, immediately after confronting Macha, Green begins to vomit and after seeing a doctor is told he has three days to survive. Avoiding Macha’s assassins with the help of two “guardian angels”, Avi and Zach (Andre 3000 and Vincent Pastore), Jake is left with a complicated situation – and a ticking clock. Will he be able to get his revenge on Macha before his body gives up on him? Are Avi and Zach really there to help? Revolver will leave you wondering what’s real and if redemption is really a road everyone gets to walk on.

Is Revolver a one-shot or are there lots of bullets in the barrel?

If there’s one thing Guy Ritchie doesn’t do, it’s tell a straight-forward tale. 2005’s Revolver features his trademark jumping around from character to character, events happening out of beautiful randomness, all culminating in a few clutch final scenes. Fans of the director’s manic style will find Revolver a welcome addition to his anthology of films that include Lock, Stock and Two Smoking Barrels, Snatch and RocknRolla. If this is your first experience with a Ritchie film, strap yourself in because you’re about to experience one hell of a fun ride. 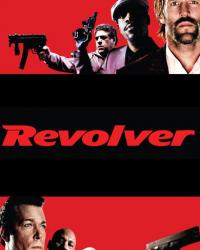